Following a difficult period for motorsport worldwide, 2017 sees S A Rallying clawing back support following a very brave decision by Motorsport South Africa and the NRC (National Rally Championship) Rally Commission Steering Committee, to remove the very expensive S2000 cars from the equation for the 2017 season.

Starting with the very popular Tour Natal event held in KZN in March, S1600 Super R2 is the premier rally championship class for South Africa for 2017. What this has done is to pave the way for a class, that in the writer’s opinion, is long overdue, the return of spectator friendly classic rally cars, the largest number of which are Rear Wheel Drive. For 2017, the official support class for the S1600 SUPER R2 rally championship is the National Classic Class which is growing slowly and showing off some interesting historic rally cars.

No matter what one hears or wants to believe, S2000’s are extremely costly to build and campaign. With the fully imported M-Sport Fiestas weighing in at around R5.2m and the Toyota Yaris’s built locally by Glyn Hall’s Hallspeed outfit over the R3.5m mark, add some VW Polos/Skoda kits to the mix and again, purely the writer’s opinion, the class was not sustainable in the long term.

Given the change in specification, manufacturers and privateers were caught on the back foot. The first 2 events of 2017 saw only 7 S1600’s competing, rather low for what is presently THE National Rally Championship class. 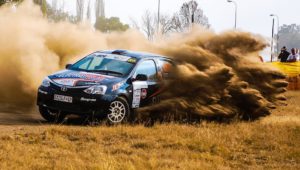 At round 3 held in Secunda on 19th/20th May, Chris Coertse entered his new Mazda and won the premier class for the round. A turn up for the books was that overall he was beaten into 2nd place by a classic entry, the 1977 Ford Escort BDG of Lee Rose from White River.

For Round 4 in Port Elizabeth, the Volkswagen Rally boasts 7 S1600 R2 entries, with newcomer Johannes Potgieter entering a Ford Fiesta R2. Sadly Jono van Wyk from Swaziland is not making the trip. The Classic Class has 8 entries which is the best effort for the year so far. Given that Natie Booysen, Nico Nienaber and Roelof Coertse have not entered is an indication that there is growth in this class. There is talent in abundance in the S1600 class, albeit a small entry still at this stage. Guy Botterill, Chris Coertse and Richard Leeke being the most experienced. The young gun from the Secunda area, AC Potgieter gets better and better, while George Smalberger, a track exponent, adds his own brand of experience to the mix.

The prophets of doom have had a lot to say about the state of rallying recently. Write off rallying at your peril. There are some tough old kooks around, bolstered by some new blood and a host of people working in the background to ensure that rallying survives.

Certainly, the sport has lost the high flying S2000 pilots, the Mark Cronjes, the Giniel de Villiers’, the Leeroy Poulters, the Henk Lategans, Hergen Fekken and the likes. Official manufacturer involvement has also taken a back seat, and to all intents and purposes, we have a privateer championship. The S2000’s are spectacular, no error, and a huge loss to the appeal of the sport. At the end of the day, we must play the hand we have been dealt and make the most of what we have.

The VW Rally in Port Elizabeth also has a very strong Regional entry of some 15 crews, add to that 3 Open class entries and you have a 33 car field. WATCH THIS SPACE.