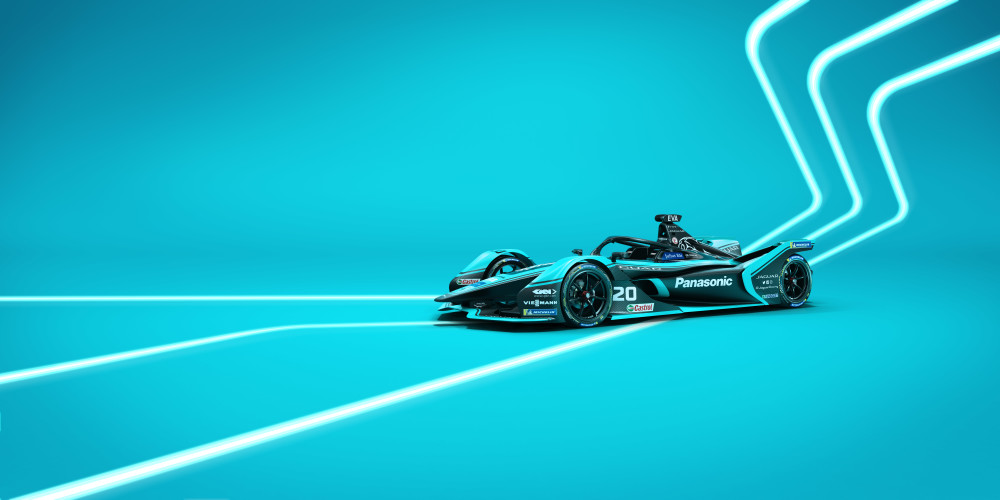 Panasonic Jaguar Racing has revealed its brand-new all-electric race car to challenge for season six of the ABB FIA Formula E Championship. The British team’s official launch in front of VIPs, media, partners and fans was at Jaguar’s brand-new design studio in Gaydon, Warwickshire – the most advanced automotive design centre in the world.

The Jaguar I-TYPE 4, featuring an all-new motor, gearbox, invertor, rear suspension and dampers has seen its overall weight reduced offering improved handling and performance.
With the lightest and most efficient powertrain the team has ever produced, the Jaguar I-TYPE 4 has a lower centre of gravity and will allow the team to push towards even more points, podiums and wins in season six.

The new powertrain also features a new vehicle control module – which increases the processing capacity and allows a faster rate of software development. Experience gained in development of the World Car of the Year-winning and fully electric Jaguar I-PACE, along with three years of participating in Formula E, puts Jaguar at the forefront of battery electric vehicle innovation.

James Barclay, Panasonic Jaguar Racing Team Director: “The start of a new season is an exciting time for the team. After months of hard work we are excited to show the world the new Jaguar I-TYPE 4. We have applied all of our experience in Formula E to date and our latest innovations into the new racecar and the development team have created what we believe will be our most competitive Formula E car to date. We’ve learnt how to win as a team and we are hungry for more in season six. We can’t wait to get racing!” Briton James Calado has also been announced as the new Panasonic Jaguar Racing driver ahead of season six of the ABB FIA Formula E Championship.

The 30-year-old, who started karting in 1999, has competed against some of the biggest names in motorsport including Formula E champion Jean-Eric Vergne and F1 driver Valtteri Bottas, during his career. He became the 2017 WEC GTE Pro champion and early this year took victory in the GTE Pro class at the Le Mans 24 hours.

Calado, who is based in Penarth, Wales, has a wealth of single-seater experience in GP3, GP2, British F3 and F1, scoring points, podiums and wins which he is keen to replicate in Formula E.

With the green lights of season six just over 50 days away, James Calado and Panasonic Jaguar Racing teammate, Mitch Evans, are focussed on preparing for the most competitive season of Formula E yet as they look to build on last season’s success.

Panasonic Jaguar Racing is delighted to welcome a new partner in Castrol, one of the world’s leading lubricants brands. The team is using Castrol’s advanced e-fluids onboard the Jaguar I-TYPE 4, building on a long and successful motorsport partnership. Over the years Jaguar Racing and Castrol have enjoyed extraordinary motorsport success, including victory at the prestigious Le Mans 24 Hours and the 24 Hours of Daytona. Using Castrol’s e-fluids, will allow Jaguar and Castrol to collaborate, learn and win on the track and further develop advanced technology and e-fluids for the award-winning Jaguar I-PACE and future roadgoing Jaguar vehicles.

Mandhir Singh, Chief Executive Officer, Castrol: “We’re excited to extend our long-term partnership with Jaguar to the Panasonic Jaguar Racing Formula E Team. Putting our e-fluids to the test in the tough Formula E race environment is the ideal way to develop the e-fluids and electric vehicle technology of the future. This will help us deliver what drivers want, to go further on a single charge and enable the longer life of transmission and component parts”.

The Castrol logo will feature on the driver helmets and suits, team kit, and merchandise.

James Barclay, Panasonic Jaguar Racing Team Director: “To improve our performance on the track, we need the best partners, and we are delighted to welcome Castrol for season six. Their innovative automotive lubricants are already benefiting the team and we can’t wait to start the season together in Saudi Arabia for the Diriyah E-Prix in November.”

Two other huge, but equally tiny additions will also join the team in season six. Panasonic Jaguar Racing has partnered with leading toy manufacturers the LEGO Group and Scalextric to create mini versions of the electric cars. The LEGO® Speed Champions set featuring the Formula E Panasonic Jaguar Racing GEN2 car and Jaguar I-PACE eTROPHY and Jaguar I-TYPE Scalextric will be on sale next year. Availability in South Africa is to be confimed.