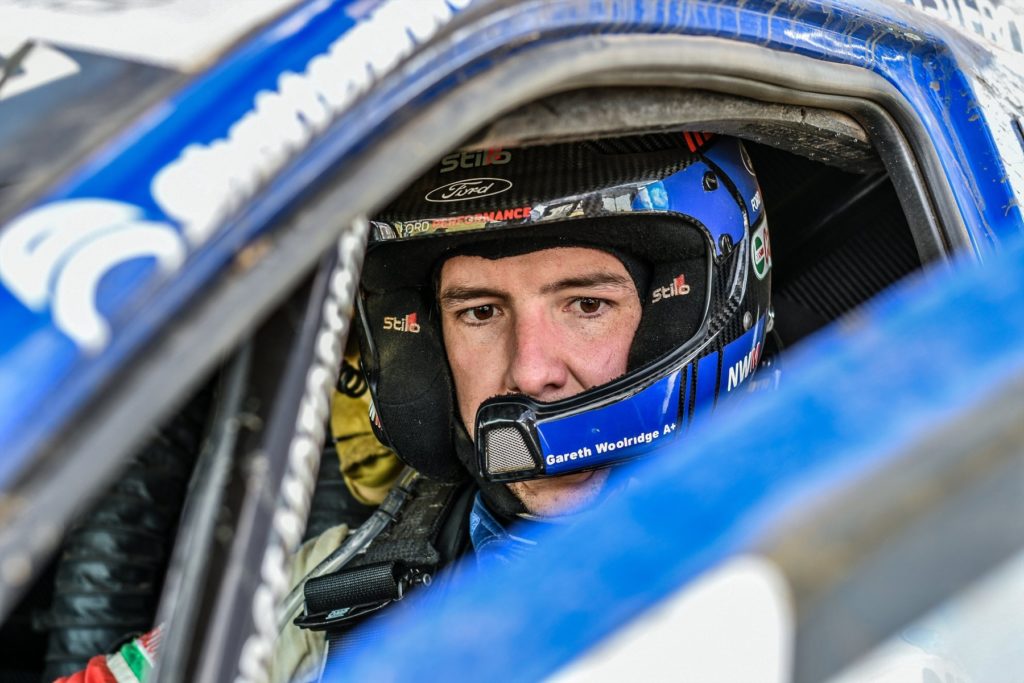 The Woolridge name is inextricably linked to motorsport in South Africa, with Neil Woolridge and his two sons, Lance (30) and Gareth (26), the driving force behind the world-renowned Neil Woolridge Motorsport (NWM) team, based in Pietermaritzburg, which produces the Ford Ranger for cross country racing worldwide.
Growing up with motorsport as a way of life, with father Neil claiming numerous South African championships on two and four wheels, and living the Dakar Rally dream in 1998 and 1999, it’s no surprise that Gareth was drawn to the sport from an early age.
As with many youngsters, he started out riding off-road motorcycles. “My first bike was a Yamaha PW80 that dad bought on auction,” Gareth says. “The paint was peeling and cracked and it didn’t run, so dad and I stripped it down completely in our garage at home and rebuilt it together.” This proved to be a solid grounding for the young Woolridge, as he has been intimately involved in building, preparing and racing vehicles ever since.
“I started out with some hare-scramble motorbike races, but I always loved cars and I was at NWM or going testing with the team at every opportunity,” he explains. Gareth’s racing career formally kicked off when he was 16, following in Lance’s footsteps by competing in a single-seater buggy known as a ‘cricket’, which was modified to run a Yamaha Raptor 350cc engine.
Success soon followed, as he won the KwaZulu-Natal championship in his first year, and claimed his second regional title the following season, now racing with a more powerful 450cc engine – for which he was awarded KwaZulu-Natal colours for motorsport at the age of 18. After matriculating in 2012, Gareth went straight to work at the Neil Woolridge Motors 4×4 Centre, and then later moved over to the motorsport division as a technician building and preparing race cars.
The rapid rise in popularity of side-by-side (SxS) all-terrain vehicles as a more affordable form of motorsport saw Gareth being sponsored by Polaris to compete in the regional championship, then moving up to the national series the following year with long-time friend Boyd Dreyer fulfilling the co-driver role. 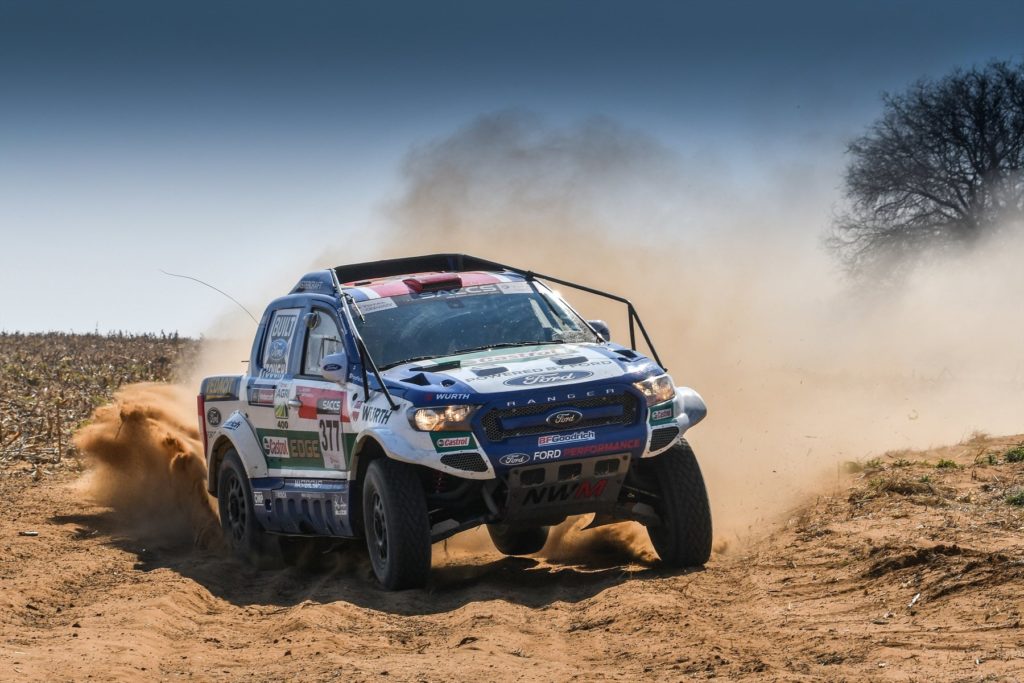 Despite competing against some top names in off-road racing, the young Woolridge shone in the class, and was on track to wrap up the 2014 championship at the final round. “We just had to finish the last race of the season to win the title, and we had a good qualifying performance,” he explains. “The car then inexplicably refused to start, and although the team worked through the night to try resolve the problem, we couldn’t get it running for the final race and we lost the championship by one point. It was heart-breaking to be so close to winning the title, but that’s sometimes how it goes in motorsport.”
With his impressive pace clear from the outset, the NWM team elected to put Gareth in a powerful Class T Ford Ranger V8 for the 2015 season, once again partnered with Boyd. “Our vehicle was a bit of a parts bin special, as we built it from a variety of second-hand, standard and spare parts, and raced it under the NWM banner as a privateer entry,” Gareth says. “It was a fantastic learning experience for Boyd and I, and we were able to mix it up with the top Class T competitors, regularly finishing as the highest-placed privateer team.”
For the 2016 season, and with Lance out of action while recovering from an operation to address a recurring back injury, Gareth and Boyd moved into the spotlight as part of the official Ford NWM team, alongside former Production Vehicle champions Chris Visser and Ward Huxtable. It was another impressive year for the young crew, as they scored four podium finishes in Class T, and ended fourth in the championship.
They continued their superb form in the ensuing seasons, claiming third in the Class T championship in 2017 and 2018. Just as Lance had done two years earlier, Gareth made his international motorsport debut in 2018 by competing in Brazil’s arduous seven-day 3 600km Rally dos Sertões, finishing 10th overall and winning his class. “The Rally dos Sertões was the perfect opportunity to get some multi-day cross country racing experience,” Gareth says. “It’s a tough race with long stages and extreme heat, and I was very happy to win my class on this challenging event.”
For 2019, Gareth and Boyd competed in just one event at the Mpumalanga 400 season-opener, filling in for the Brazilian crew of Marcos Baumgart and Kleber Cincea. They finished second to team-mates Lance and co-driver Ward Huxtable – the reigning Class T champions.
With his focus on a support role for the remainder of the year, and the team starting to design and develop an all-new FIA-class Ford Ranger, Gareth travelled to BOS Suspension in France to be trained all on aspects of shock absorber servicing and maintenance. He also took over as lead technician in new vehicle assembly, as well as assisting with design work and fabrication. 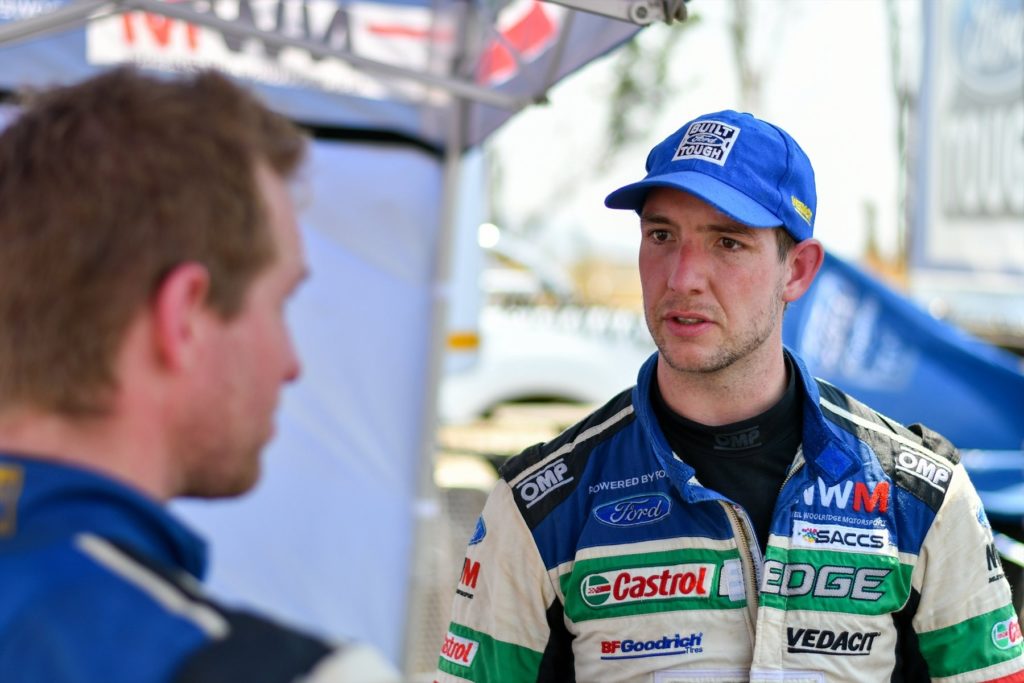 “Being trained at BOS Suspension in France was a real eye-opener and a great experience for me, as it helped immensely in making improvements to our current suspension setup in the Ranger V8 to ensure we remained competitive, particularly with our move to the FIA class in 2020 with our existing Class T Rangers,” he explains. “It was also invaluable in the design and development of our all-new FIA Ranger, which will be the first vehicle in the world to use the latest, all-new suspension available from BOS.”
Although Gareth was initially tasked with building, testing and developing the all-new FIA Ranger – powered by Ford’s 3.5-litre EcoBoost V6 engine – in preparation for its planned debut at the Botswana Desert Race in June this year, the COVID-19 pandemic turned the project and the championship on its head. This saw the build for the new vehicle delayed, and the Brazilian team’s local campaign limited to just the opening race in Dullstroom in February as the international travel restrictions came into force.
When the 2020 SA Cross Country Series (SACCS) finally resumed in August for round two, Gareth and Boyd returned to action after almost a year and a half out of the hot seat. Nevertheless, they were on the pace from the moment the flag dropped, finishing as the top-ranked NWM Ford Ranger in sixth place. They repeated the feat at the Total Agri 400 by crossing the line fourth overall.
At the Ford Parys 400, the young duo scored an excellent podium finish in third place overall – an exceptional result considering they were competing in a slightly modified Class T Ranger against much newer FIA-class rivals that are stage winners and overall victors on the legendary Dakar Rally. A fifth-place finish at the season finale, following a late-race mechanical issue for Lance Woolridge and Elvéne Vonk, saw Gareth and Boyd wrap up their season in sixth place overall, just one point ahead of their team-mates.
“We are very happy with our results this year, considering that we’ve been at a disadvantage to our rivals, but the podium finish in Parys was a great achievement for the team,” Gareth says. “It showed the immense work everyone put into the Ranger behind the scenes to ensure we could challenge for podium results.
“I have been very fortunate to have Boyd as my navigator for the past six years, as he is extremely professional and dedicated,” he adds. “It also helps that we’ve been best friends since school and we work very well together as a team, which is essential to achieve success in this sport.” 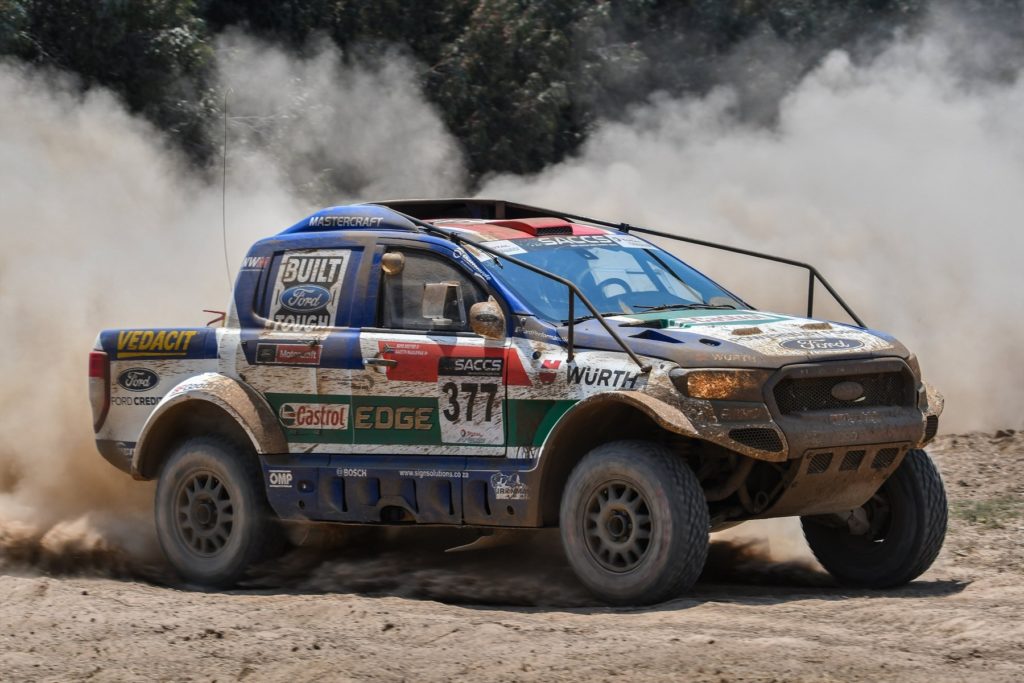 Although the unusual 2020 season has now been wrapped up, there’s still a lot of work going on at NWM. “Our focus is now on an intensive testing and development programme for the all-new FIA Ranger, to ensure that we can fight for race wins and the 2021 championship right from the start,” Gareth says. “The new package has already been very impressive during our initial testing, and it gives me goosebumps thinking about racing this exciting machine next year. I can’t wait!”
Besides targeting victory in the local championship, Gareth has his sights set on the biggest cross country racing prize of them all: “My dream is to compete at the Dakar Rally in a Ford Ranger built by our team,” he explains. “Being part of the NWM crew that went to the Dakar Rally in 2014 only fuelled this aspiration further. Hopefully we can turn that dream into reality soon with our all-new FIA Ranger, to not only compete in this legendary race but to aim for victory.” 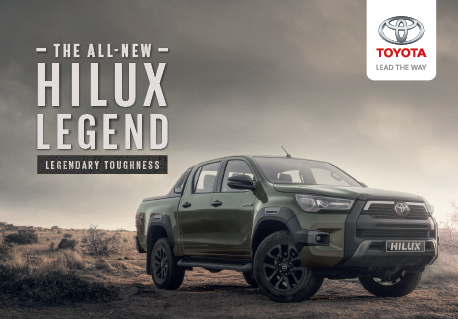 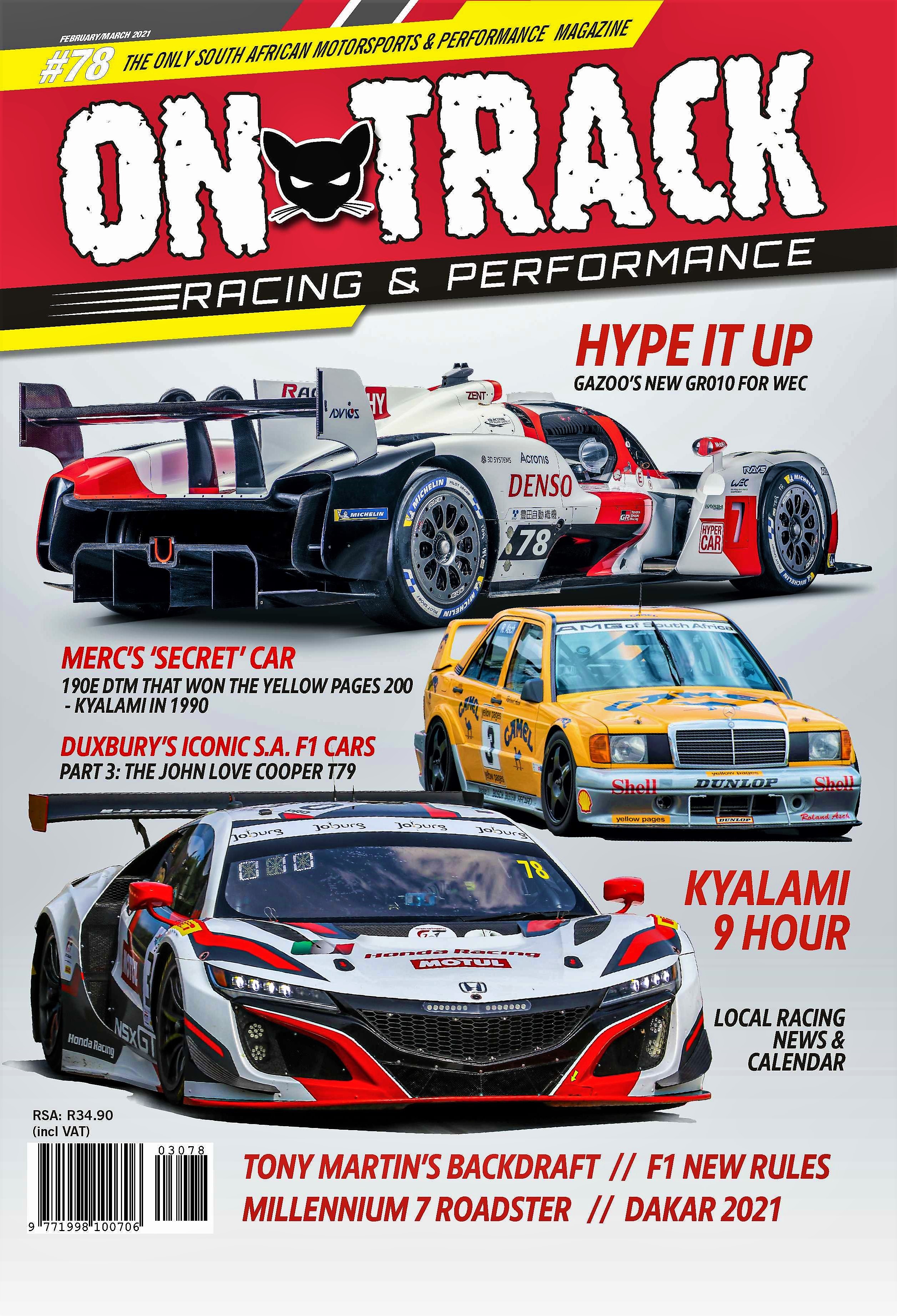 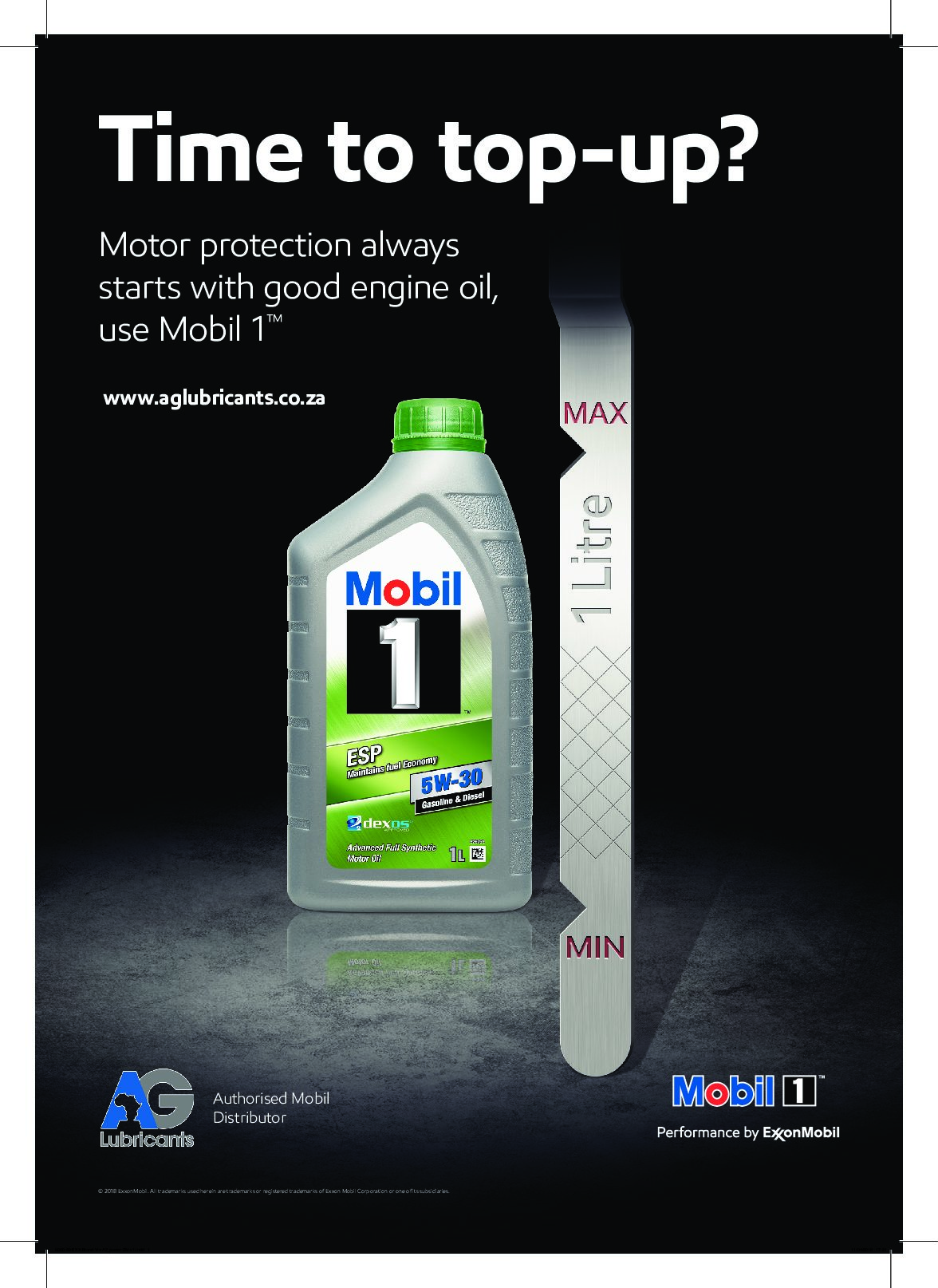