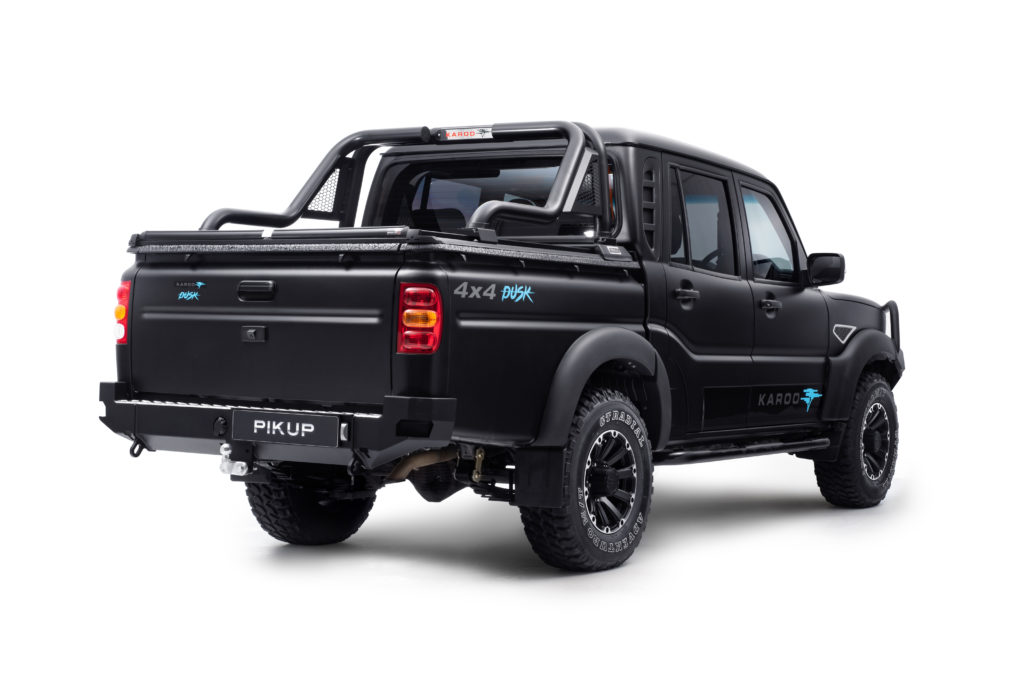 Inspired by the beautiful vistas of the Karoo and requested by ardent Pik Up fans, Mahindra is launching a very special edition of its top-selling Pik Up Karoo S11 Automatic.
The new Mahindra Karoo Dusk S11 Automatic is a striking matt black lifestyle-focused double cab model based on the S11 Karoo and is fitted with the best on offer in the Mahindra parts catalogue and a few very special additions that are not available to other Mahindra Pik Up owners.
“The Karoo has a special place in South African culture. It is simultaneously known for the hard and unforgiving landscape and the openness of its hard-working inhabitants.
“That is what inspired us with the creation of the original Pik Up Karoo. Now we are stepping it up with the S11 Karoo Dusk, which is both stunning to look at, and ready for anything the road can throw at it,” says Rajesh Gupta, CEO of Mahindra South Africa.
Standout styling
Starting with the styling – the new Karoo Dusk is an unmissable lifestyle double cab. The model is wrapped in a hard-wearing matt black film that makes it unique from any production Pik Up on the road.
As this model is based on the S11 Karoo flagship, it has the same styling bar on the rear load bay, the side-mounted steel steps, robust over fenders and roller shutter door. These have, however, been colour coded to match the dark look of the Karoo Dusk, leaving only the highlights on the front fender vents, diamond plated rear step and the silver highlights on the alloy wheels to contrast with the overall dark design. 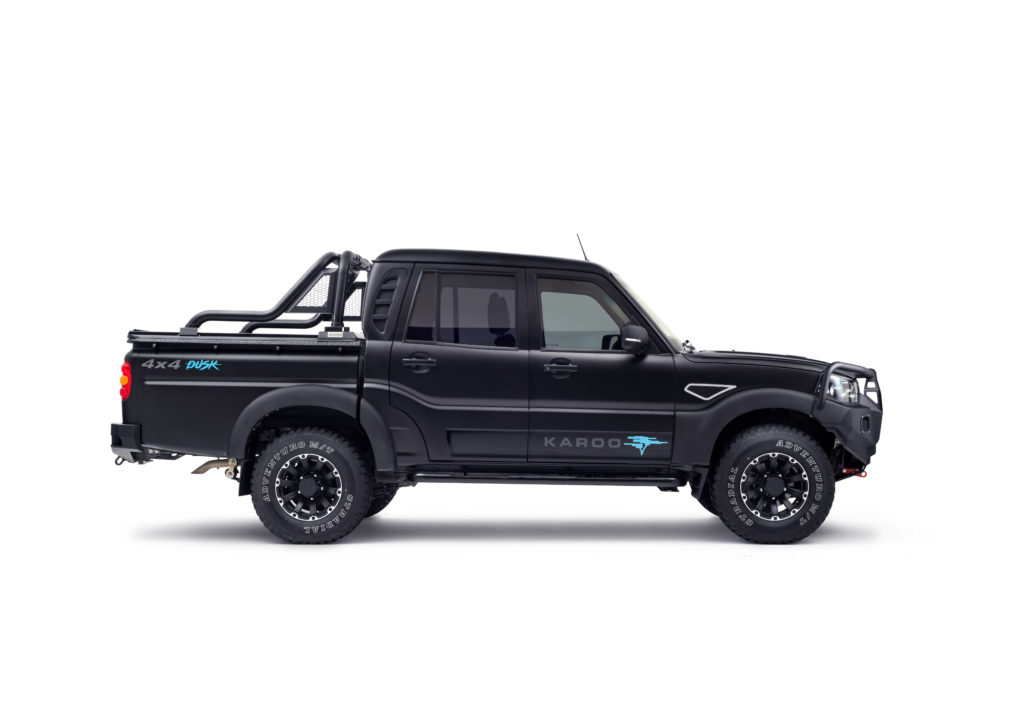 Mahindra has further tasked its designers to create a special dark-blue hue for the Dusk decals and distinctive acacia-tree in the Karoo logo, which matches perfectly with the black wrap and is unique to this limited-edition model.
Adding to the stand-out design is a special set of 17” machined off-road alloys in black with silver detailing in the outer rim. The alloys are fitted with special mud terrain tyres from General Tire that adds an aggressive tread profile and additional visual appeal to this unique bakkie.
Built for the bush
Building on feedback it has received from ardent Pik Up fans, Mahindra has added a set of off-road bumpers. These machined steel bumpers not only look striking but add additional functionality for technical off roading by increasing the approach and departure angles and exposing larger sections of the off-road tyres to the rockface when climbing or descending steep off-road sections.
Both bumpers have been designed with overlanding in mind. The rear bumper doubles as a heavy-duty step and is trimmed with non-slip diamond plate. It has mounting points for a high-lift jack, extra heavy-duty recovery loops and a tow bar with flush-mounted electric connection as standard.
The front-mounted off-road bumper has received special attention for this model. Aside from the aggressive profile, it has a powder-coated steel bush bar to protect the front headlamps in off-road situations. 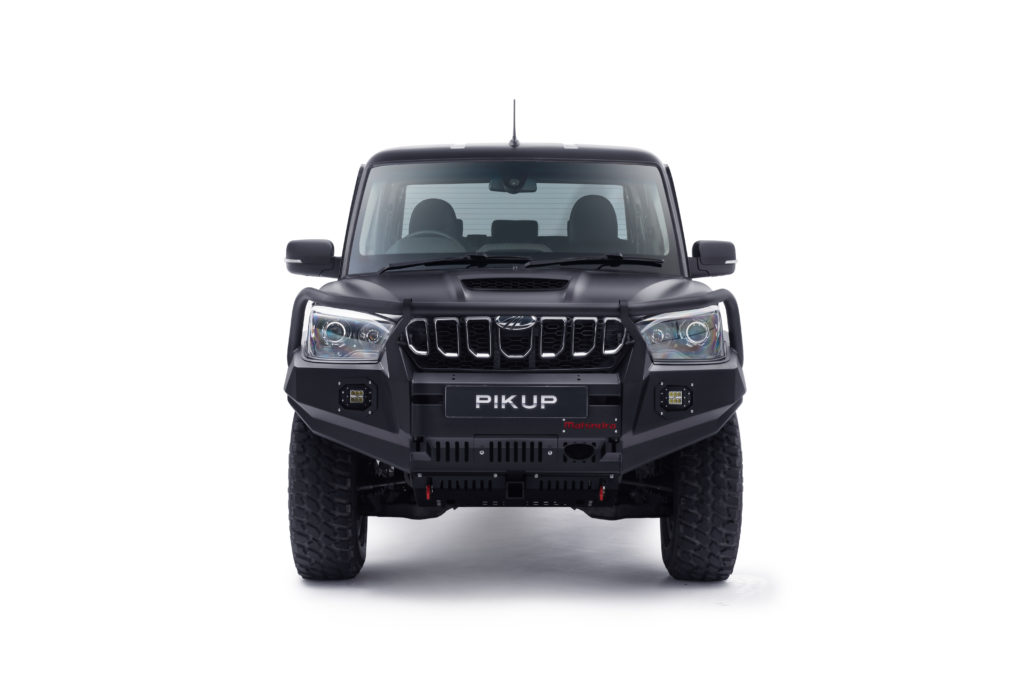 The front bumper also has special LED-spot lamps fitted and feature recovery loops and jack mounting points. The recovery points and Mahindra decals are trimmed in red to stand out against the matt black trim.
While the Karoo Dusk is designed to stand out, its pièce de resistance is hidden from view under the body of the Pik Up. Here, the engineering team has created a special off-road suspension that is completely unique to the Karoo Dusk.
The suspension features special heavy-duty gas-filled off-road shock absorbers, heavy-duty custom-designed leaf springs and new suspension bushes. While these upgrades do not change the Karoo Dusk’s ground clearance, they ensure faultless performance on dirt, rock, sand and mud, while not adversely affecting its road manners.
Best-in-class luxuries
Since its launch in early 2020, the S11 Automatic – in standard and Karoo guise – has been top-sellers for Mahindra South Africa. This is in no small part owing to the incredible value for money offered by the flagship Pik Up. The Karoo Dusk limited edition extends that value offering even further.
The Karoo Dusk is fitted with luxury features that include a touch-screen infotainment system with in-built reverse camera, Bluetooth phone connectivity, Apple CarPlay and Android Auto as standard. It is also equipped with cruise control, climate control, a multi-function steering wheel and electric windows, to name but a few of the luxuries.
As a version of the Karoo flagship, the Karoo Dusk is also fitted with a lockable roller-shutter door on the rubberised rear load bay.
Limited numbers available
The Mahindra Karoo Dusk S11 Automatic is available in extremely limited numbers at dealers across South Africa for R549 999.
All Karoo Dusk models are sold with a 4-year/120 000 km mechanical warranty and 5-year/90 000 km service plan. 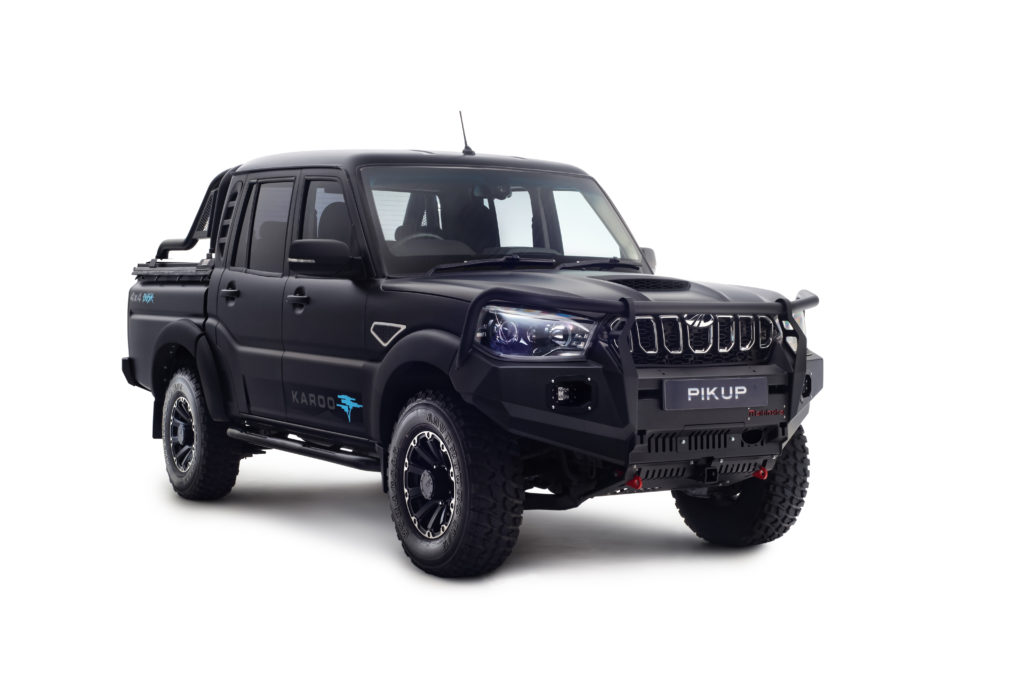 Be the first to comment on "LIMITED MAHINDRA KAROO"