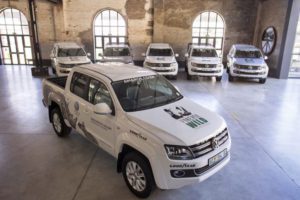 Recently, Volkswagen Commercial Vehicles invited three VIP Fleet Customers, namely Milana & Chris Pretorius (Smollan), John & Sandra Anderson (Würth) and Nick & Amanda Jacobs (Telesure), to join Wilderness Foundation Africa on a rhino darting experience to bring about awareness and education regarding the nationwide rhino poaching crisis and the work being done on the ground to address the situation. were
Volkswagen has been partnering with the Forever Wild Rhino Protection Initiative since 2011 and in the last six years the Amaroks have assisted in the arrest of suspected poachers; the confiscation of firearms; the recovery of rhino horn; extended patrols in game parks around the country; rhino tracking exercises and the relocation of rhino for safety reasons and support to aerial teams across the country.
Wilderness Foundation Africa darts, notches and places tracking devices on rhino for identification purposes. The DNA tissue samples collected allow the tracking of the rhino population. All information gathered through these darting experiences is inputted into the national RhODIS database.

RhODIS® (Rhino DNA Index System) is a project that was initiated by the Veterinary Genetics Laboratory of the University of Pretoria in order to help with the plight of the rhinos. The Veterinary Genetics Laboratory is collecting DNA samples of rhinos across the country to create a database using the unique DNA profile of individual rhinos. The goal is for all rhinos to be on the system. This will deter poachers and assist in forensic prosecutions.
“Protecting the natural heritage in South Africa is no longer a nice to have but something that must be done. Rhinos, amongst other fauna and flora, need our help and as a company, VWSA is willing and ready to assist Wilderness Foundation Africa wherever we can.” said Thomas Schaefer, Volkswagen Group South Africa Chairman and Managing Director.

Be the first to comment on "Volkswagen and Rhino conservation"