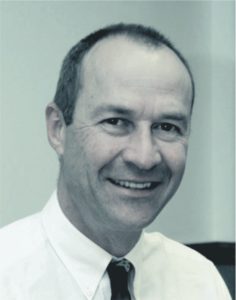 The current Formula One rules, which mandate a 1.6 litre V6-turbo-hybrid power plant, are responsible for producing the most complex engines in F1’s history. The process of managing internal combustion and battery-stored electric motor power via sophisticated computer systems has baffled several of the best brains in the sport with some (notably those at Honda) yet to fully overcome the challenges they face.

Engine design complexity has often raised its head in F1. More than half a century ago – in 1966 – when the F1 regulations changed to allow three-litre naturally-aspirated engines, the BRM team came up with an H16-configured engine that pushed the limits of the complexity envelope at that time.

Essentially two flat-eight, 1.5 litre power plants mounted one above the other with their two crank shafts geared together, the engine was powerful but heavy and – thanks to its complexity – unreliable. It severely compromised the performance of the BRM racers and managed just one win – powering the Lotus of Jim Clark at the American Grand Prix in 1966.

The Lotus team was desperate to find an alternative power plant and collaborated with Ford and Cosworth Engineering on the design of a new three-litre V8 engine.

At this time, in terms of the rules, manufacturers were free to choose an engine configuration that suited them best. Ferrari, with its history of successful multi-cylinder machines, designed a V12 engine, a configuration that was also common to the Maserati-powered Coopers, and adopted by the Weslake-powered Eagle and the Honda of that era. 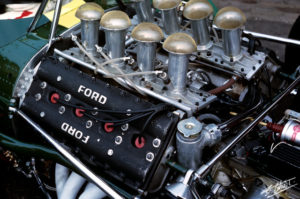 Unlike these engines, the Ford Cosworth DFV (Double Four Valve) unit was compact, lightweight and surprisingly powerful with 400 horsepower on tap right out of the box. More importantly, it was a simple design, based on a successful four-cylinder Formula 2 engine.

The DFV engine’s first race was at the Dutch GP in June 1967, where it powered a newly-designed Lotus 49 to an historic victory.

Initially, by agreement, the engine was reserved for the sole use of Team Lotus, as Ford had no plans to sell the engine to other teams. But the demand escalated as the teams realised the potential of this ingenuous design and Ford saw its chance to dominate the sport.

The last win came in 1983 with Tyrrell at the Detroit GP in the US. Martin Brundle (well known today as a F1 TV pundit) was the last person to race in F1 with a DFV, also in a Tyrrell, at the Austrian GP in 1985.

This wasn’t the end of the DFV story, however, as the engine was also used in sports car racing with great success. The first DFV win at the Le Mans 24-hour classic fell to a Ford Mirage in 1975 while a Rondeau Ford was the surprise winner in 1980.

In 1982, the venerable DFV was given a capacity increase for endurance racing and reintroduced as 3.3 and 3.9 litre DFLs, which continued to be competitive until 1990. Other variants included the 3.5 litre DFY, DFZ and DFR, while the 2.5 litre DFW gained success in the single-seater Tasman Series in New Zealand and Australia.

A 2.5 litre turbocharged alternative, the DFX (later available as the ‘short-stroke’ DFS) was produced for American Indycar racing. It notched up 10 Indianapolis 500 wins between 1978 and ’87.

In 1985, the original Ford DFV was designated as an engine for the then new Formula 3000 and enjoyed successes for nearly a decade in this single-seater, F1 feeder series. Pedro Lamy took the last win for a DFV in top-class motorsport, at the Pau F3000 round in south-west France in 1993.

By the time the DFV departed the motorsport stage, a quarter of a century after its debut win in Holland, continued development had increased its power output (in DFR guise) to nearly 630 horsepower – significantly higher than the original ‘67 unit.