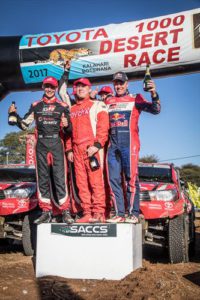 JWANENG – It was a clean sweep for Toyota on this year’s Toyota Kalahari Botswana 1000 Desert Race, held near the southern Botswana town of Jwaneng on the weekend of 23-25 June, 2017. At the sharp end of the field, it was former Dakar winner Giniel de Villiers, partnered with Dennis Murphy, that recorded his first Desert Race victory, behind the wheel of his Toyota Gazoo Racing SA Hilux in association with Total Quartz. Their winning margin was only six seconds, but the double-points haul of the year’s only marathon race could prove pivotal in the championship.

Teammates Leeroy Poulter and Rob Howie ended their ten-race winning streak, by finishing in second place on this year’s most testing round of the SA Cross Country Series.

“It is a great feeling to finally add the Desert Race trophy to my cabinet,” said an ecstatic Giniel de Villiers, who cracked the win on his fourth attempt at the 1000 km-long race. “It was really tough out there, but Dennis did a perfect job on the notes, and we were fortunate never to have to get out of the car during the race.”

For Poulter and Howie, the race started with business as usual. The pair won Friday’s qualifying race, albeit by a slender margin of only 25 seconds. This might have been enough on any other cross country race, but the Kalahari is an unforgiving place, and a puncture on the first of the two race days saw De Villiers/Murphy take the lead.

It turned into a ding-dong battle between the two heavyweights, as De Villiers/Murphy reached the Designated Service Park (DSP) at Jwaneng ahead of Poulter/Howie, drawing first blood for Desert Race honours.

But then came Day 2, and De Villiers/Murphy had to open the road. This helped Poulter/Howie to close the gap to their teammates to nearly nothing, with the two Class FIA Hilux crews thundering their way through the Kalahari in a spectacular display of power and reliability. 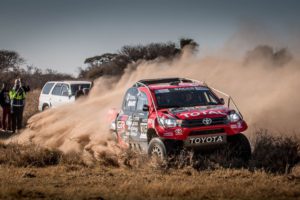 Poulter knew he’d have to push right to the end, in case De Villiers slipped up at any point. But, despite pipping De Villiers on the day, Poulter couldn’t quite get close enough for overall victory. The experienced and tenacious De Villiers drove like a man possessed to bring his Toyota Hilux home just six seconds ahead of the hard-charging Poulter. And that after 1000 km of racing.

This gave De Villiers his first Desert Race victory, and Toyota the top two spots on the overall podium. But there was more joy as the Malalane Toyota Hilux crew of Johan and Werner Horn brought their Class T Toyota Hilux to the finish in third place overall – giving Toyota a clean sweep of the podium. 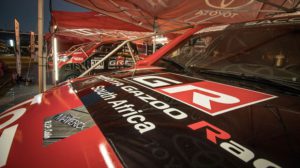 “We can’t be happier with our results this weekend,” said a smiling Glyn Hall, Toyota Gazoo Racing SA Team Principal. “Winning the Desert Race is never easy, but winning every class is something special. Furthermore, we did some very valuable testing for our Dakar programme, so for us the weekend in Botswana couldn’t have gone better.”

The Toyota Kalahari Botswana 1000 Desert Race was round three of the 2017 SACCS. The next town on the calendar is Harrismith, with the race taking place on 28 and 29 July, 2017.