Brett Garland makes it a double win for Round 9 of the AutObarn SuperHatch Series at Kyalami under pressure. 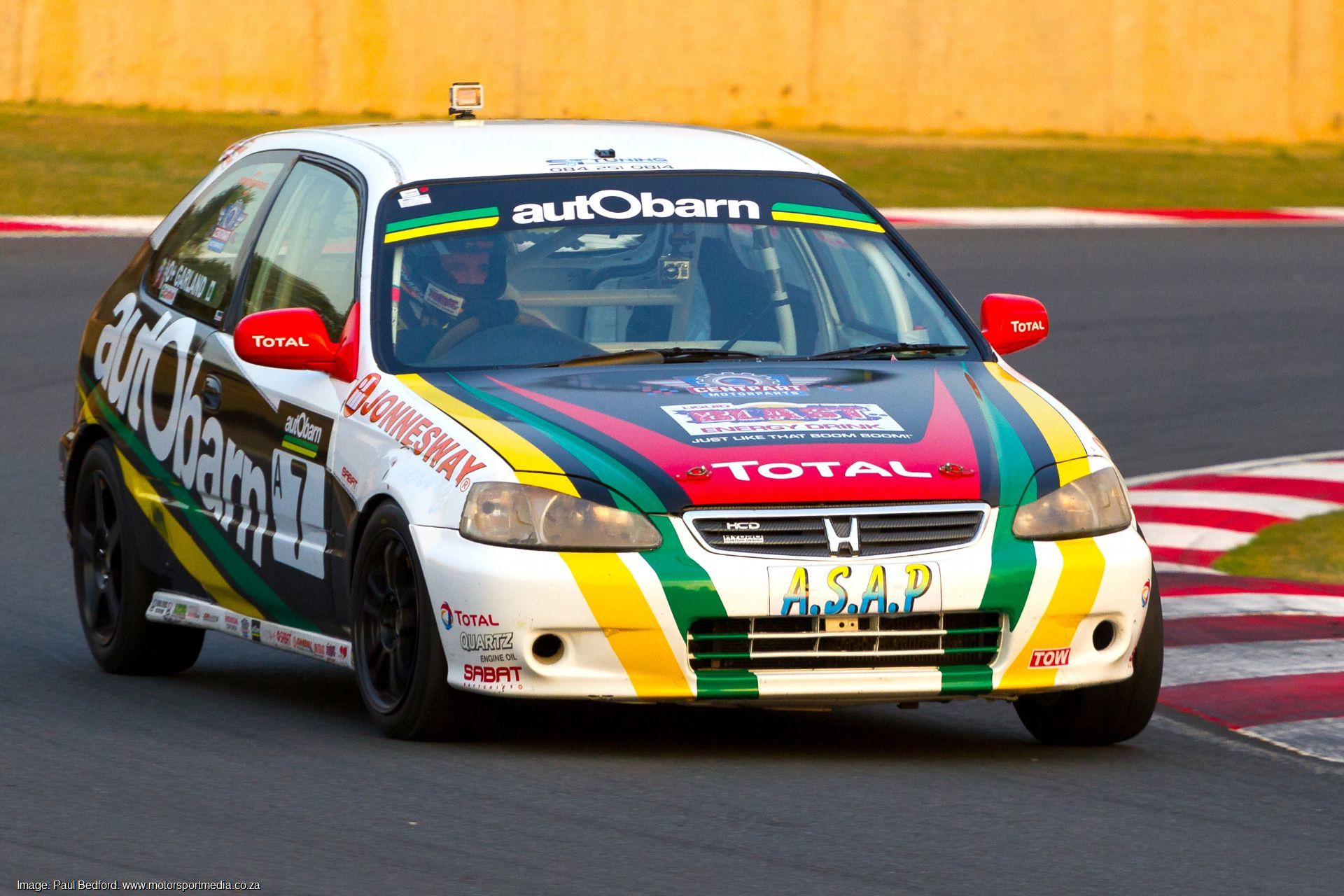 The AutObarn Superhatches shared the racetrack with the 111 Saloons which saw a very crowded grid and a full field of race cars making it tough for all drivers to stay out of trouble, possibly the hardest round for the AutObarn SuperHatch drivers this year.

Brett Garland desperately needed a double win to get back into the running for an overall class title and win he did taking the double win in both races in his AutObarn Total, Jonnesway, Sabat Honda over Karel Stols Pretoria Noord Toyota and class B winner Zane van Zyl Credit Guarantee/S&T Tuning VW Golf each time, while Craig Priestly Tactical Fluid Ford Laser and Barry Viljoen BB Diagnostics & Services Opel Kadett shared out the Class C honours.

“Being Kyalami, our sessions and time on the track were very limited, therefore, the normal free practice was turned into qualifying sessions 1 and 2 and our 3rd practice session became race 1. Knowing that the weekend was going to be blistering hot I knew the 08.30 session was going to be the session to set a good qualifying lap in, so I went out guns blazing but due to the 47-car grid including 111 Sports and Saloons getting any sort of space on the grid was going to be a challenge. I managed 2m12.1 and Jonathan du Toit Trans Africa Racing Honda did a 2m11.6 putting me just behind him for the start. Our next session was at midday and it was too hot to set a better time as predicted,” said Garland.

“Due to the 111 turbo charged cars, I started in 12th and Jonathan started in 8th on the grid, making my task monumental. We did a rolling start so timing was going to be everything. Lights out and all hell broke loose down the main straight with pieces of 111 cars flying all over the track, Jonathan seemed to be having gear issues, I got ahead of him by turn 2 and past about 3 of the 111 cars.  The first half of the 1st lap saw Jonathan right on my tail, his gear gremlins seemingly getting worse, my goal was to stay out of trouble and stay ahead of him. Going to complete lap 1 just after the finish line Jono’s engine let go and put him out of the race, the pressure was off and all I had to do was stay in position until the end of the race.”

“Overnight du Toit’s pit crew had fitted another motor to his car and he was to start at the back of SuperHatch class A. Because I finished 1st and 6th overall, I started 6th on the grid with my nearest rival in 13th and Jonathan 29th, knowing my goal was to win all I had to do is maintain a reasonable pace to win and stay out of trouble, the start saw the car ahead of me the PTA North Toyota’s Lexus get a terrible start, boxing me in and allowing about 5 cars to pass me. This obviously helped Karel Stols in the other PTA North Toyota RunX get close to me. But with my pace I could regain the gap and safety between us, ending 17secs ahead of 2nd placed Stols over the line and my double win in the class.” said Garland

AutObarn’s Brett Garland now leads the AutObarn SuperHatch Class A by 1 point ahead of Jonathan Du Toit and moves up to 3rd overall in the series subject to the official point being announced, with 1 round to go at Zwartkops on the 25th November