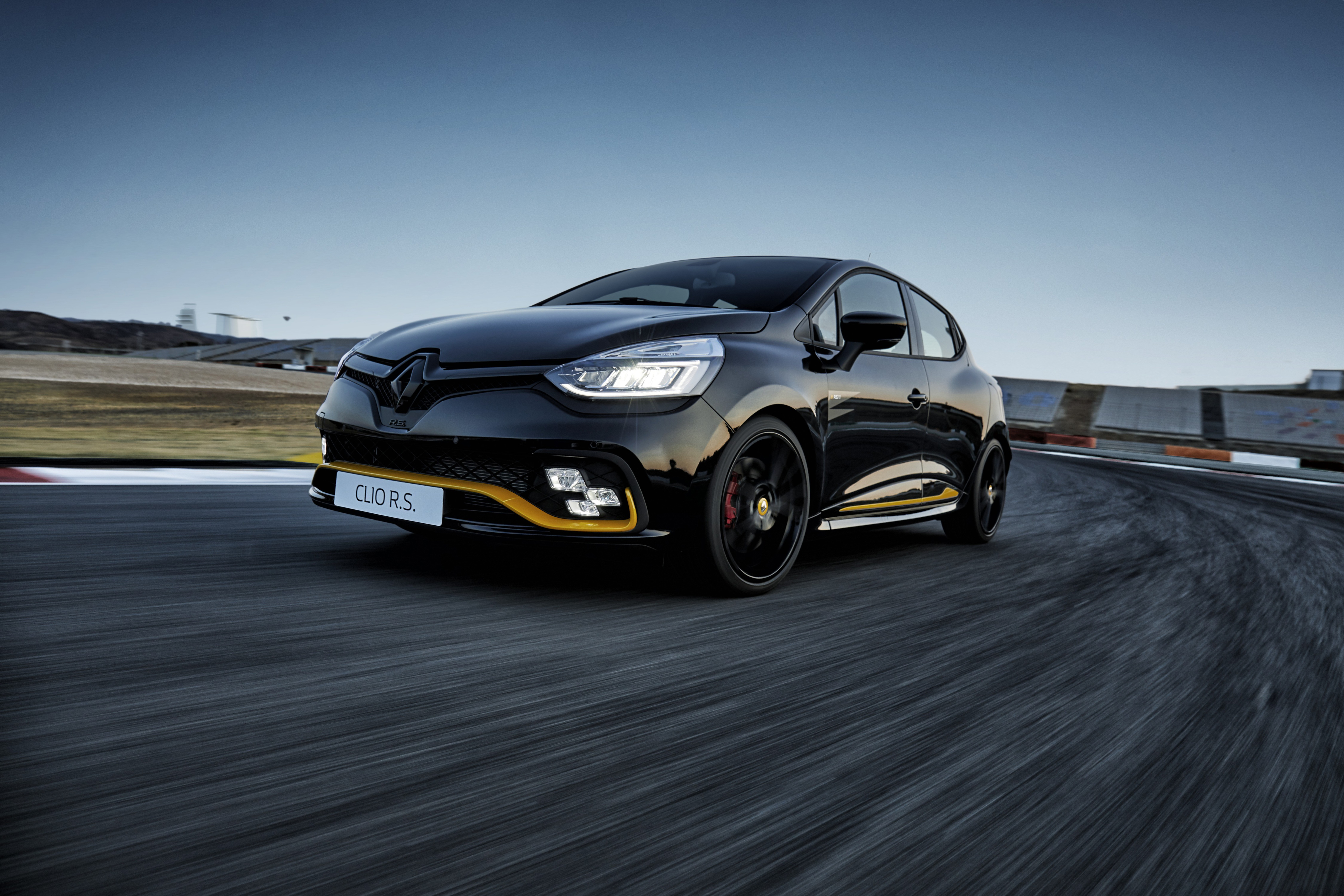 Having achieved in excess of 13 million sales since launching globally in 1990, the Renault Clio is undoubtedly the world’s all-time best-selling French car. A success story that has continued with the fourth-generation Clio. This iconic model is sold in more than 100 countries worldwide, and made its debut into South Africa back in 2000. The Clio 4 model has gained strong on-road presence in South Africa with over 25,800 units sold since its introduction.

The new Renault Clio represents the first production model to don the evolutionary design genes advocated by Laurens van den Acker, Renault’s Senior Vice-President for Corporate Design, as expressed in the striking concept car, DeZir, unveiled at the 2010 Paris Motor Show.
The DeZir epitomizes the brand’s commitment to more emotional style, clearly evident in the style transfer to the new Clio model.  Right from its roots, the Clio has stood out as a genuine small car boasting big car refinement, with the fourth-generation Clio capitalizing on this vehicle’s timeless appeal but with even more soul.

The new Clio marks one of the first Renault models to sport the brand’s new visual identity through its distinctive front-end styling featuring a bolder version of its trademark diamond-shaped logo, instantly expressing passion and seduction, while continuing to offer a comprehensive range of equipment – notably efficient engines, innovation and on-board technologies that far outrivals competitor offerings.
With this winning combination, Renault South Africa is set to re-affirm the model as one of the top performers in the extremely competitive AB New Hatch segment.

This iconic ‘small car with the big attitude’ has demonstrated its infinite popularity through consistently achieving Top 5 performer in the extremely competitive AB New Hatch segment. Compact and affordable yet oozing style and class, the Clio has won over the hearts of an ever-increasing customer base, thanks to its style and versatility as well as through its substantial equipment package. 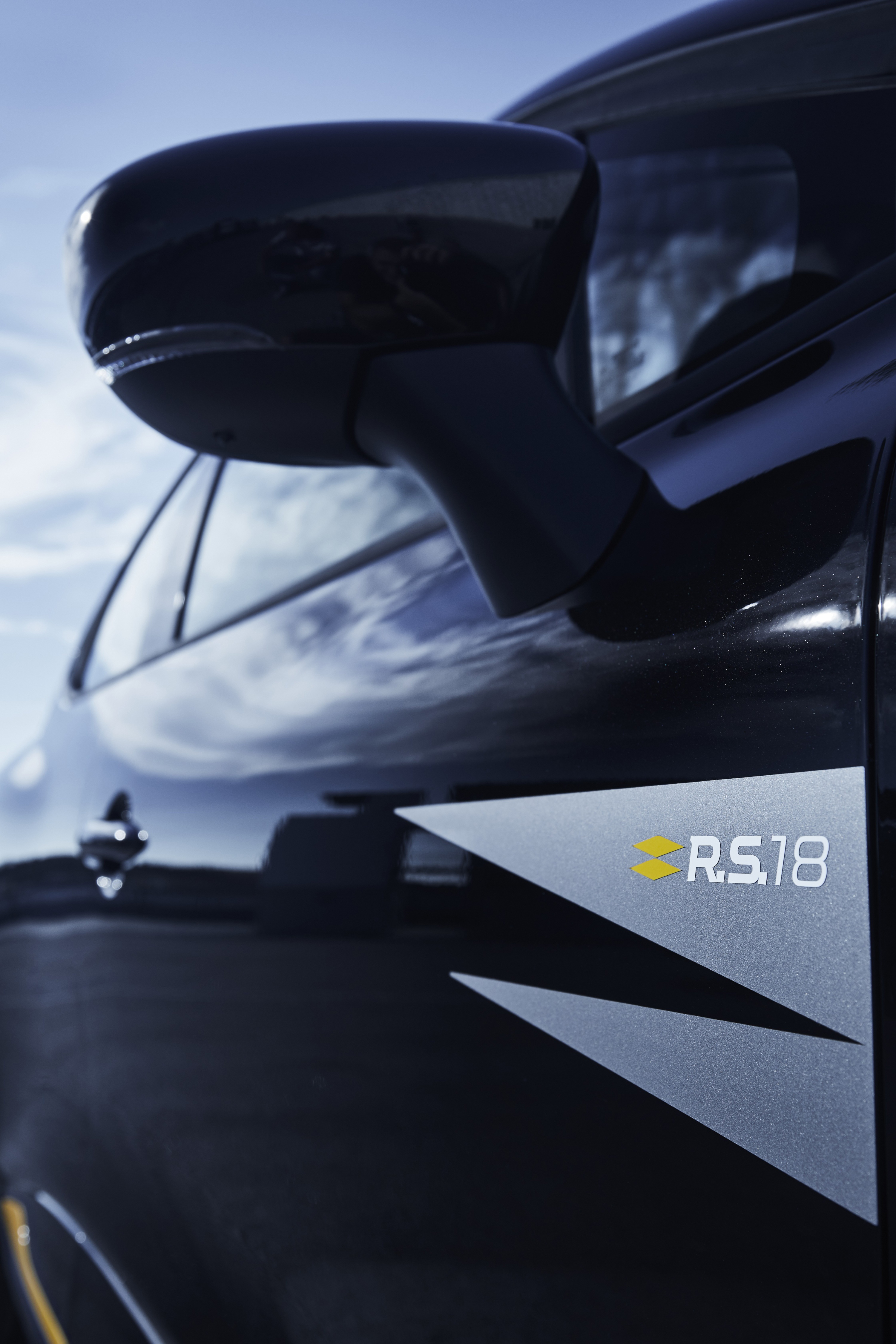 STRIKING BY DESIGN
The striking design of the Renault Clio model is undeniably irresistible. Not only do its sensuous curves make a statement, but its re-proportioned grille and iconic C-shaped signature lighting are pleasing to the eye, giving the Clio heightened character.  The distinctive styling of the Renault Clio is further enhanced by the low the new Pure Vision LED headlights on the flagship models, as well as the stylish alloy wheels underlining its dynamic silhouette. With the Clio, every detail counts.

The Renault Clio benefits from the use of finishing materials previously reserved for Renault’s top-of-the-range models, striking the right balance between seductive exterior styling and a high quality interior finish.

INVITING INTERIOR
It’s clearly evident that the interior of the Renault Clio model is strongly focused around comfort and driving pleasure – with high attention to detail from its high quality finishes, plush materials to the ergonomics. The interior of the Renault Clio is remarkably roomy with the ability to comfortably fit five adults. While the 60/40 split rear seat configuration offers great versatility and practicality, and the 300-litre boot ample storage space.

The versatile R&Go® application is available within the Clio Authentique. This easy-to-use and customisable interface offers access to advanced technology even from the entry level of the Renault Clio range. Developed to enhance the driving experience, R&Go® is a smartphone/tablet multi-function application that adds innovative functionality to the vehicle, allowing access to four different universes: Multimedia, phone, vehicle and navigation.

SAFETY COMES FIRST
The Renault Clio Model offers the best of Renault’s know-how in Active and Passive Safety.
Clio achieved a five star EuroNCAP rating, with an unparalleled level of on-board safety and protection features and equipment, such as ESP,ABS, EBD + Brake Assist, D+P+S airbags and Electric Windows as standard across the entire range.
The Clio proudly ranks as one of the 5 safest cars in South Africa.

50 YEARS OF RENAULT SPORT HERITAGE
Renault Sport is renowned for providing thrilling experiences that enable people to live their passion to the fullest. Thanks to a successful motorsport history and a passion for new challenges, Renault creates world class race cars; and this self-same race car technology is applied to create versatile and exciting sports cars. Renault’s incredible Renault Sport models proudly embody the bridge between Renault and Formula 1. 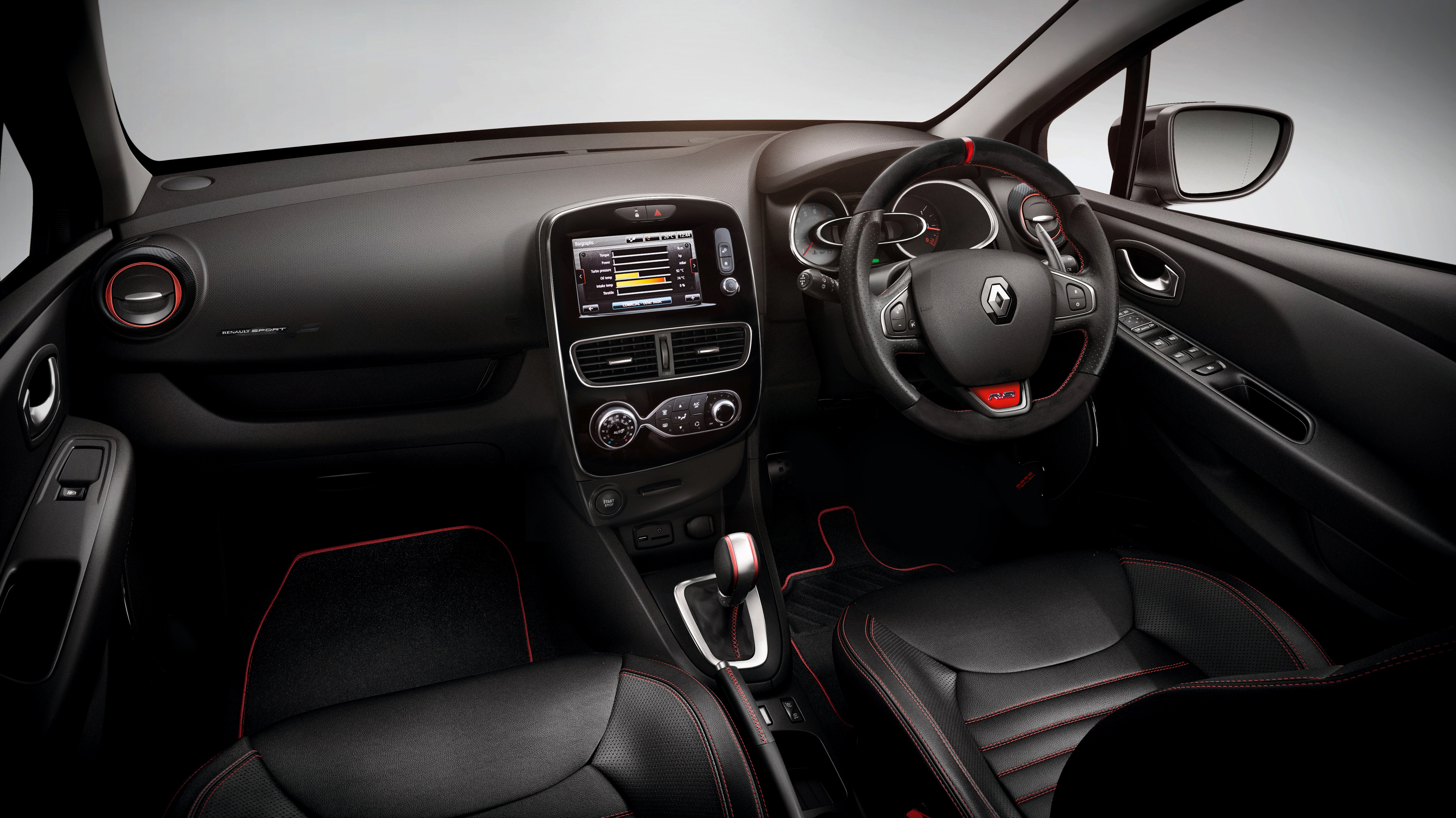 The Renault Sport Clio is undeniably one of the most popular hot hatches, with its proven track record as one of the best handling and most rewarding cars on the market. The latest addition to the Clio R.S. Range – Clio R.S. 18 F1 was preceded by numerous derivatives which were legendary in their own right, to name but a few – The 1st R.S. model, the Renault Clio Williams (1993) that was designed to celebrate the success of the Renault-powered F1 team at the time. More powerful Renault Sport models emerged post the Clio Phase 2’s revamp, in the guise of the incredible Renault Sport Clio V6, with the 3.0-litre V6 engine housed in the rear of the vehicle, with increased power output (252bhp), making it the fastest model to this day. The limited edition Renault Sport Clio 182 Trophy launched in 2005 was also deemed legendary amongst Renault Sport enthusiasts.

The long line of iconic Clio R.S. models was boosted with the local introduction of the Renault Sport Clio 200 & 200 Cup, which proved their worth in every road test entered. The Clio 20th Anniversary model, which was launched in 2010 in celebration of Clio’s 20th year of being, was distinguished by its Pearl White paint, black alloys and black roof, a striking and extremely coveted limited edition indeed.
The much celebrated Clio R.S. model line-up was further complemented through the Clio R.S. Red Bull, another extremely admired limited edition, with its distinct colour scheme and much larger 18” wheels.

Following on these illustrious Renault Sport Clio models, it is with pride that the new Clio R.S.18 F1 is introduced to the market – a formidable hot hatch, further enriched thanks to Renault Sport expertise.

NEXT LEVEL SPORTY DESIGN
Boldly expressing the link between the race track and the road, CLIO R.S. 18 bears the same name as the Renault F1 race car competing in the Grand Prix. It also features the same iconic colour scheme as the Renault Sport F1 Team car: its Deep Black cloak and accented Liquid Yellow – a look that just exudes performance.

Clio R.S. 18’s exclusive styling is also reflected in the Renault Sport decals added to the door panels and the roof. The blacked out badging and rear diffuser contrasted by the yellow details on the side strips, front blade and wheel caps make the overall look even more radical. The doorsills on this limited edition model also reveal a unique number for that added acclaim.

NEXT LEVEL PERFORMANCE
The feisty Clio R.S. 18 is powered by a 1.6L Turbo-charged engine, featuring a lowered and stiffened Trophy chassis – front suspension featuring hydraulic compression stops, and an Akrapovic exhaust system, the New Clio R.S. 18 is a purebred sports car, destined to be highly collectible.
Clio R.S. 18 boasts the Launch Control feature enabling simulation of an experienced racing driver.
This electronic intelligence allows the driver to experience the exhilaration of a standing start. ‘Launch Control’ is activated with paddles at hand, right foot on the accelerator and left foot on the brake. Once the left foot is raised from the aluminium pedal, the New Clio R.S. explodes off the line, with breathtakingly dynamic gear changes.

FROM TRACK TO ROAD
The phenomenal Clio R.S.18 displays the ultimate in Renault Sport technology with an impressive range of track oriented features that demonstrate the prowess of the direct F1 technology transfer to this exclusive model. The innovative R.S. Drive button gives you access to three modes: Normal, Sport and Race. According to the mode, R.S. Drive alters the mapping of the gearbox, ESC behaviour, steering and the sensitivity of the accelerator pedal. Multifaceted and versatile.
The engine delivers 162kW at 6,050rpm and torque of 280Nm is reached from just 2,000 revs. This engine benefits from ground-breaking technology modelled on the DLC (Diamond-like carbon) derived from Formula 1. Its engine verve is complemented by tightly controlled fuel consumption *5.9L/ 100km. The sporty turbo engine is accentuated by the exclusive coupling with the EDC 6-speed dual-clutch gearbox.

SMART TECHNOLOGY COMES STANDARD
When it comes to passion, the New Clio R.S 18 is unbeatable.
Aside from the breath-taking design, sporty features and exclusive equipment devoted to racing, the functional interior is packed with additional innovative technology, synonymous with much of the Renault model range –
 Onboard navigation on offer via the 7” touchscreen, with a range of other easy-to-use one touch functionalities – Multimedia, radio and telephone systems with Bluetooth connectivity.
 Cruise Control-speed limiter, whereby regulated cruising or maximum speed can be selected, with steering wheel mounted controls to allow for speed adjustment.
 Rain sensors, automatically regulating the frequency of your windscreen wipers according to how heavily it is raining, and light sensors, enabling the headlights when the sensors detect a certain level of darkness.
 The Renault Hands-free Card Key for convenient remote entry, and in support of the easy Stop/ Start functionality.

The Clio R.S. 18 F1 Model is in a league of its own, proudly bridging the gap between F1 technology and road-going performance cars. 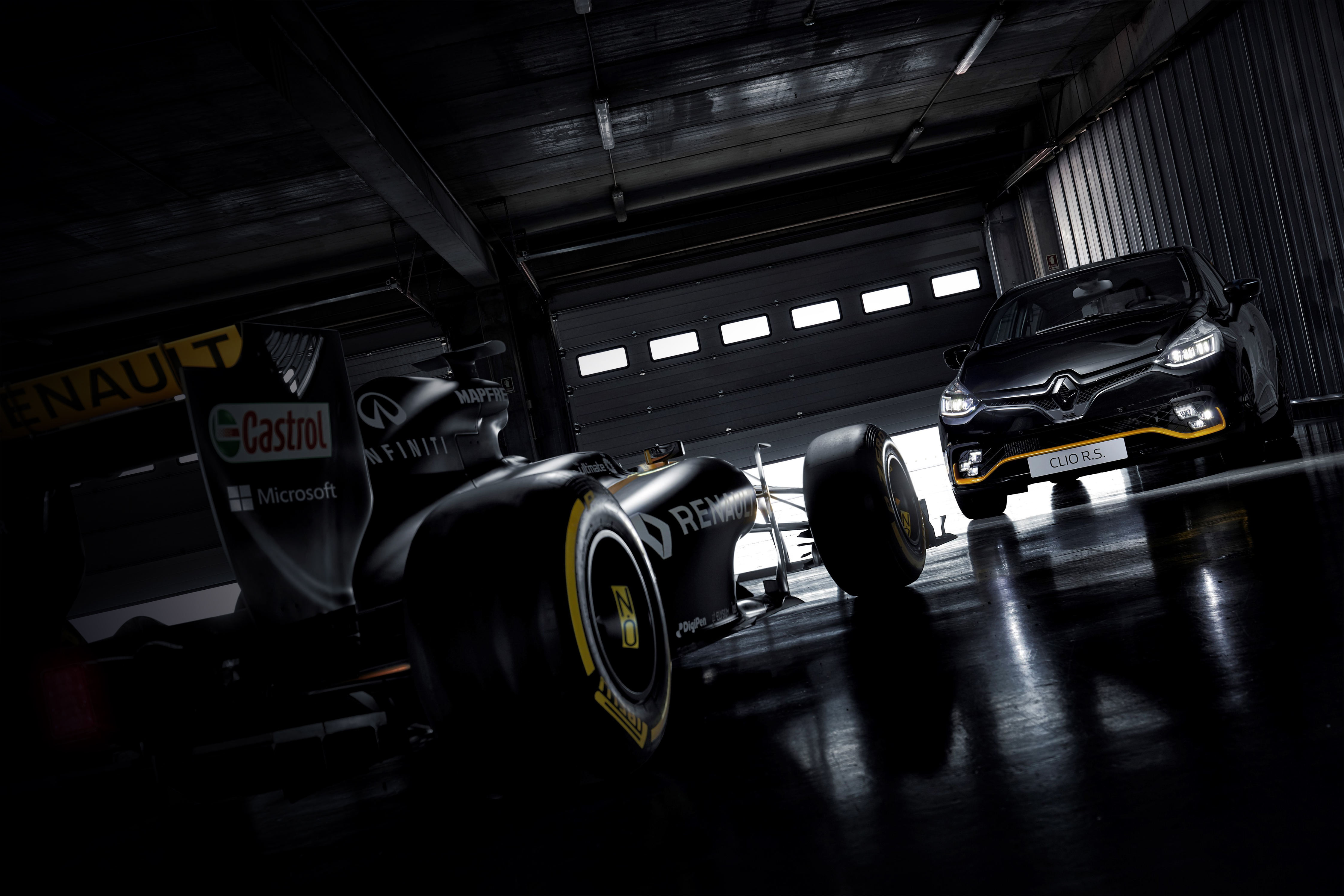