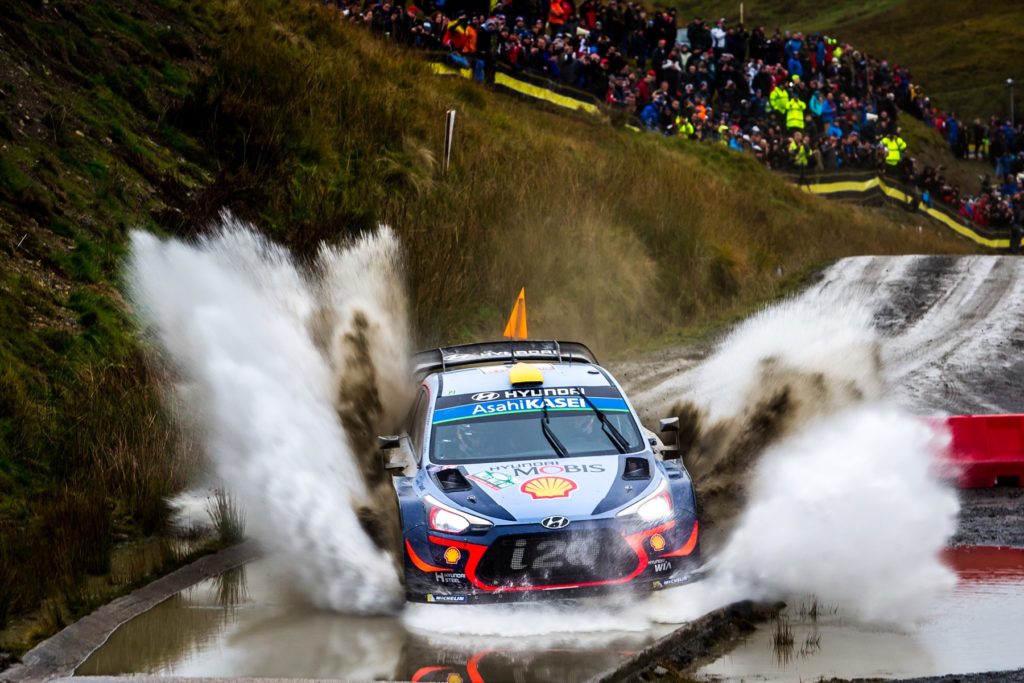 Hyundai Motorsport has suffered a setback in its FIA World Rally Championship bid following a lacklustre performance at Wales Rally GB over the past weekend.

Hyundai Motorsport has lost ground to Toyota Gazoo Racing in the manufacturers’ fight, now holding a 20-point deficit. With two rounds of the 2018 WRC season remaining in Spain and Australia – and a maximum 86 points up for grabs ¬– the title battle remains fierce.

Crew Notes: Neuville/Gilsoul (#5 Hyundai i20 Coupé WRC):
Neuville has retained the lead in the drivers’ championship over Sebastien Ogier and Ott Tanak, with the two extra points scored for fourth place in the Gwydir Power Stage giving him a small cushion of seven points over Ogier.

Neuville said: “The mistake yesterday ended any chance of scoring a podium position, but we’ve pushed hard to reclaim a few lost positions. The championship is far from over. From a fan point of view, it’s getting exciting between me, Sebastien and Ott.”

Crew Notes: Mikkelsen/Jaeger (no. 4 Hyundai i20 Coupé WRC):
The Norwegian crew scored three stage wins over the weekend, but Mikkelsen struggled with illness which hampered his final day.

“After our positive performance on Saturday, we struggled again on the final stages today. It was really difficult to have a good stage,” said Mikkelsen. “I was feeling really bad yesterday, so I wasn’t able to watch any videos in preparation for today’s schedule. I didn’t know where to place the car, and we had a few moments as a result. Thankfully we were able to complete the rally but not in the sort of position we need to be finishing.”

Crew Notes: Paddon/ Marshall (#6 Hyundai i20 Coupé WRC):
Paddon and Marshall finished in seventh place, and they will now prepare for their season finale for Hyundai Motorsport in the last rally of the year in Australia.

Paddon said: “There are some positives to take away from this weekend even if the result doesn’t do us justice. We took some fastest splits and top-three stage times on Saturday, and generally found comfort in the car. This morning’s stages were incredibly slippery. We couldn’t read the grip and the pace notes weren’t optimal. The second loop was better. With only 11 seconds between fourth and eighth, it was a close fight. We will now prepare for our final WRC event of the season in Australia, determined to finish the season on a high.”

Rescue mission
Team principal Michel Nandan commented: “Our aim today was to salvage whatever we could from a difficult weekend. We came to this rally hoping to fight for a podium finish, or even the win, but it hasn’t transpired. We failed to get the correct set-up of the cars for this event. We made improvements during Friday afternoon, and things were better by Saturday but with Thierry’s issue we were too far behind.
“We have to accept the result, learn from the experience and move on. We have allowed ourselves to fall behind in the championship and we now have just two rallies remaining from which we can bounce back.”