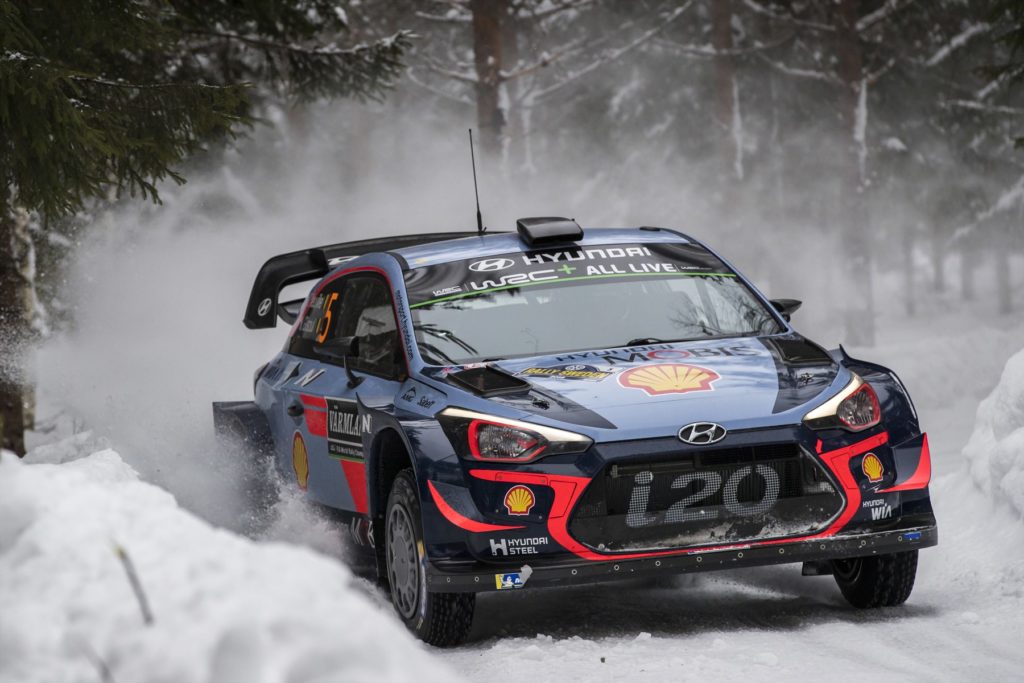 Hyundai Motorsport will be looking to build on its strongest ever start to a FIA World Rally Championship (WRC) campaign as the team heads to the snowy Rally Sweden for round two of the 14-event season.

The strength in depth of the three Hyundai i20 Coupé WRC crews allowed the team to take an early lead in the manufacturers’ championship.

The Hyundai Shell Mobis World Rally Team line-up remains unchanged for Sweden, with Neuville and Mikkelsen in the no. 11 and 89 cars joined once again by Loeb in the no. 19 WRC i20 Coupé. The trio will be aiming to defend the team’s 2018 success at Rally Sweden, in which Neuville and Mikkelsen claimed a 1-3 result. Loeb has also been a five-time podium scorer in the rally over the years.

Snow business
As one of the fastest rounds on the WRC calendar, Rally Sweden will see crews tackle snow and ice conditions with fully studded Michelin tyres to grip onto the frozen roads. The 19-stage rally remains largely unchanged from its 2018 edition: the Röjden stage has been trimmed to use the same finish as the 2017 event, while Rämmen re-joins the itinerary for the first time since 2016, albeit in reverse.
Friday’s running will once again see all but one stage hosted in Norway, making it a home rally of sorts for Mikkelsen and his co-driver Anders Jaeger-Amland.

All three crews prepared for the event with a test in Sweden last week. The sub-zero temperatures and fresh snow provided invaluable experience as they prepare the fast-paced challenge of Rally Sweden.
Team director Andrea Adamo said: “We had an exciting and competitive start to the new season at Rallye Monte-Carlo, so we want to continue with a high performance level at Sweden. We are hungry for our first win of the season! All three of our crews impressed in Monte with consistent pace and it was a close fight to the finish for both Thierry and Sébastien. Sweden has been good to us in the past, including our victory and double podium last year. ”

Crew Notes: Neuville/Gilsoul
Neuville said: “Monte-Carlo was a good sign of potential for us and we can’t wait to get in the car again in Sweden. It has been a nice event for us in the past. We’ve had some pretty competitive performances in previous years, including our victory last season. It is a rally we enjoy as a crew. Our car has always worked well, allowing us to set fast times on the frozen roads and use the snow banks to push to the limit.”

Crew Notes: Mikkelsen/Jaeger-Amland
Mikkelsen said: “Rally Sweden is a highlight in our calendar as we spend one day in Norway, so it is kind of a home rally for us. It’s the only event that is fully snow on ice. Driving with studded tyres on the stages gives you an incredible feeling, like you are floating. We were disappointed to retire from Monte-Carlo, but we had found a good rhythm with the car and we are confident we can be fighting at the front throughout the season.”

Crew Notes: Loeb/Elena
Loeb, who finished in fourth place in Monte-Carlo, said: “Rallye Monte-Carlo was a solid start in our new relationship with Hyundai Motorsport, particularly with our limited pre-event testing. We were in the fight for the podium all weekend, and we are ready to build from that. Rally Sweden is a very different challenge. It can be the most exciting rally of the season if it’s full ice with good conditions and sun, yet it can be very difficult if the snow is melting with rain – so naturally, we’re hoping to have good conditions.”

Rally Sweden begins on Thursday 14 February with a shakedown in Skalla run over 6,86 km, followed by a Super Special Stage held at the Karlstad trotting track. Friday’s running sees all but one stage take place in neighbouring Norway, with the Röjden stage offering a cross-border challenge with its start and end in Sweden. Saturday features the legendary Colin’s Crest jump in Vargasen, while Sunday’s Power Stage will finish metres away from the service park podium.