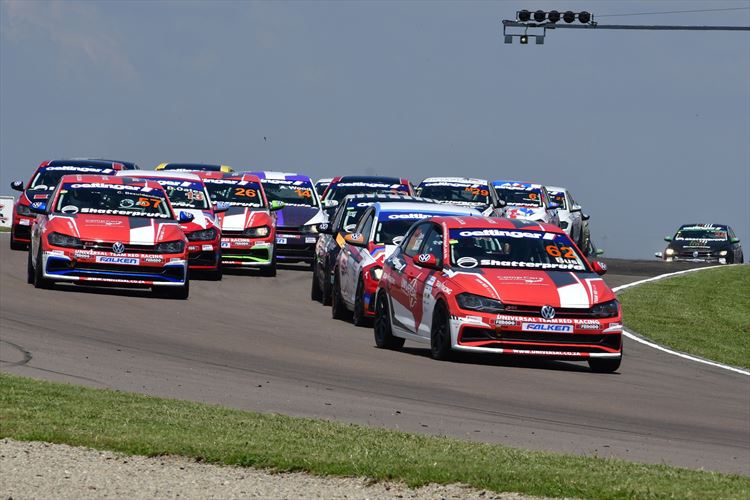 The 2.4km of tarmac at Pretoria’s Zwartkops Raceway hosted the first battle of the 2020 Polo Cup, now sponsored by famous tuning brand Oettinger. And as with the 23 seasons before this one, the Oettinger Polo Cup did not disappoint, keeping race fans on the edge of their seats. When the final checkered flag was waved and the times for both heats were added, Dario Busi walked away as the winner of Round 1 of the 2020 championship.

The weekend started with three practice sessions on a damp circuit following early morning rain on the Friday. It was however the first opportunity for all the drivers in the series to finally gauge their pre-season pace against the competition. There were early indications that fans were in for a treat with the majority of the field setting very competitive times, including newcomer to the series Jean-Pierre van der Walt and Capetonian Jurie Umpie Swart who went fastest in two of the day’s three sessions.

It all came down to Saturday morning’s qualifying session, and more specifically the Superpole session where the fastest six drivers from the formal qualifying each gets one flying lap to determine the final starting order. This adds to the excitement of the series while also adding a bit of extra tension and nerves when it comes to the competing drivers. Swart did not manage to turn his pre-race pace into pole position. Instead, it was fellow Capetonian Dario Busi who set a time of 1:11.386. This was just three tenths of a second faster than Justin Oates who in turn forced Natalian youngster Clinton Bezuidenhout into third. Swart set the fourth fastest time just a few fractions of a second ahead of the second Oates twin Darren and Delon Thompson who rounded out the top 6. 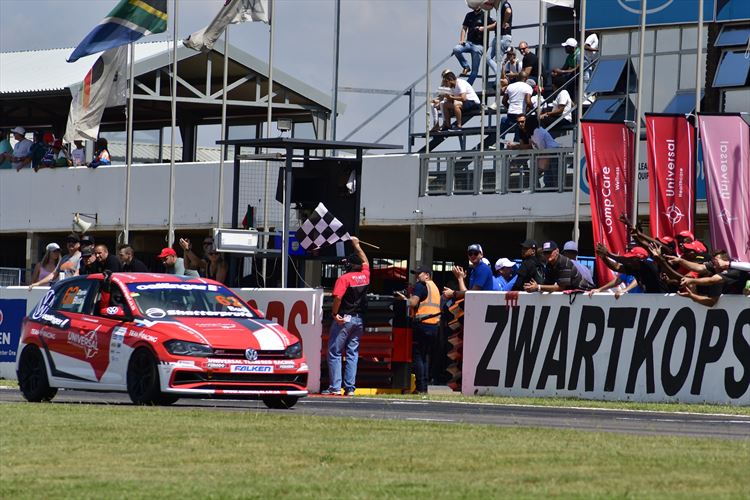 Just like in Formula 1, qualifying in the Oettinger Polo Cup is extremely important. The cars are so evenly matched often with only thousands of a second separating them that it takes great skill and sometimes risk to fight your way through the pack. Busi didn’t have to do this as he managed to fend off a determined pack during the early stages of race one. In fact, the top drivers could be covered by a blanket during the first few laps and although a few of them attempted to make a move here and there, the top order remained largely unchanged with Busi controlling it from the front. As the laps starting to run out, the Capetonian used the last of his push-to-passes to open up a slight gap which he managed to hold onto until receiving the checkered flag. The winning margin was a comfortable 4.9 seconds. Justin Oates was in the second Polo across the line with young Clinton Bezuidenhout claiming the final podium position, less than half a second back. Unfortunately for Swart who started the race in fourth, he dropped down the order to finish behind Delon Thompson, Matt Shorter and Arnold Neveling. Stiaan Kriel crossed the line in eighth just ahead of Darren Oates and Adrian Wood who rounded out the top 10. In the post-race paddock, Dario Busi was overjoyed with his first ever win: “It was a great race and a fantastic feeling to be able to control it from the front. This must be the best-handling car I’ve ever driven. Let’s see if we can get another podium in the next race,” he said.

The starting order for race two is determined by a lucky draw and on this occasion luck favoured the Oates twins with Darren and Justin drawing number one and two respectively. Busi would start the race from the second row alongside Jean-Pierre van der Walt with Arnold Neveling and Jurie Swart completing the top six. There was very nearly a collision between the two Oates twins shortly after the lights turned green which allowed Van der Walt to make the most of the situation. He is classified a master courtesy of the fact that he’s older than 35, but this was in fact Van der Walt’s first race weekend in the Oettinger Polo Cup. The Johannesburg businessman fought off a fierce attack from Darren Oates and Dario Busi, and halfway through the race he made small mistake in turn five. A small mistake however is all that these guys need and before he knew it, he had slipped down to fifth.
Darren Oates was the new leader and came under severe pressure from Dario Busi, but like Busi in race one, Oates was able to defend his advantage and cross the finish line with a winning margin of just under two seconds over Busi. Arnold Neveling crossed the line in fourth ahead of Jurie Swart and early race leader Jean-Pierre van der Walt. 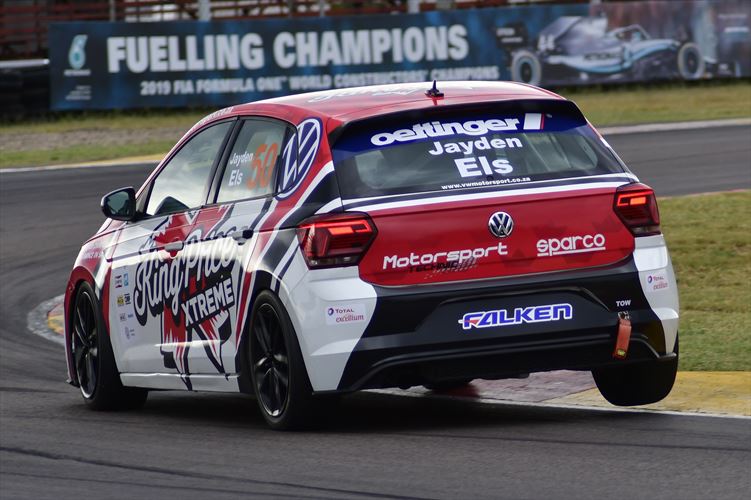 When the times for both races were added to determine the day’s overall results, it was no surprise to see the name of Dario Busi at the top of standings ahead of Justin Oates and Clinton Bezuidenhout.

“The guys at the front of the field gave us two very competitive and for the most part also clean races,” commented Mike Rowe, head of Volkswagen South Africa’s Motorsport division. “They all drove very well and set the scene for a very competitive season ahead of us. The Oettinger Polo Cup is also all about developing future stars and with that in mind, there were also a few noteworthy results, albeit from a little further down the order,” added Rowe. Round 1 of the 2020 Oettinger Polo Cup saw a number of young drivers making the step to the big league for the very first time. Most of these kids learnt their trade in the world of karting and other single seater formulas before climbing into a tin-top with front-wheel-drive for the first time this weekend. The best of these was Bloemfontein youngster Stuart White who finished his first weekend in 13th overall. 15-year old Jayden Els would have been much higher up than 16th overall was it not for missing a few gears at the start of race one while the two teammates Nathi Msimanga and Baksi Komane ended their weekend in 18th and 19th respectively. Kyalami karting star Kwanda Mokoena finished a credible 15th in race one, but was forced to retire from race two dropping him down the overall order at the end of the day.

“It’s dangerous to make any predictions in motorsport and with so many fast and talented drivers all staking their claim so early on it’s impossible to predict how this year’s championship is going to end. But one thing is for certain. It’s going to be very exciting,” Rowe concluded.

Be the first to comment on "Oettinger Polo Cup kicks off"