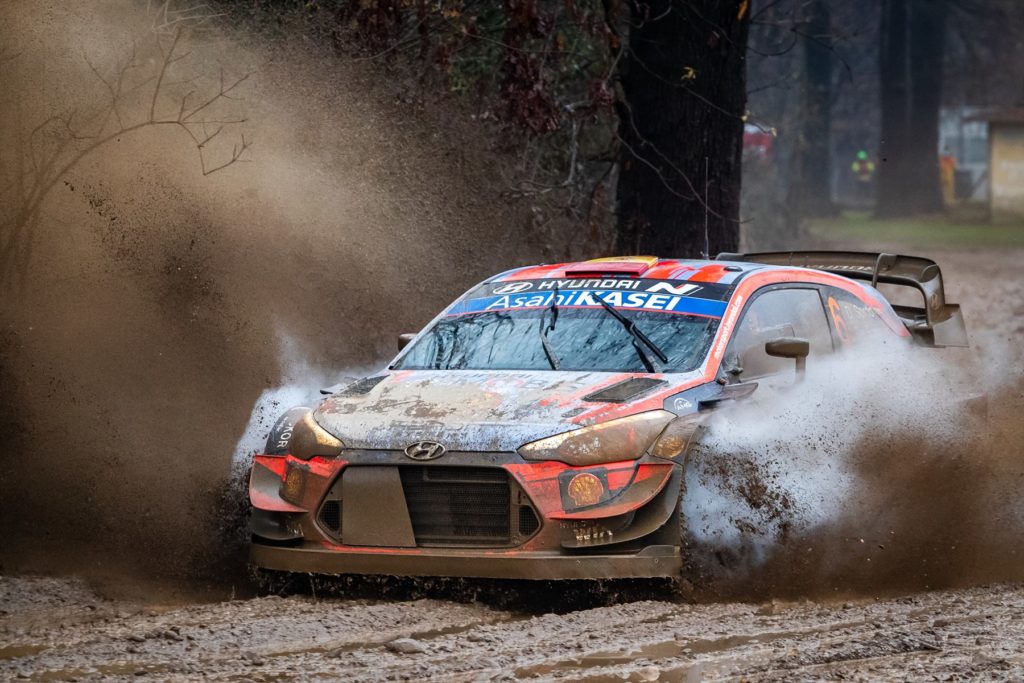 In one of the most demanding and eventful rallies of the season, with wet and often wintry conditions dominating the stages, Hyundai Motorsport scored 33 points to secure its second title with a 5-point margin.

A rollercoaster rally saw the overall classification change stage by stage, delivering a dramatic and exciting end to a heavily disrupted season. Three stages remained on Sunday morning – a third run through the 10,31-km Grand Prix and a repeat of the longer 14,97-km Serraglio test – with crews focused on a trouble-free finish. 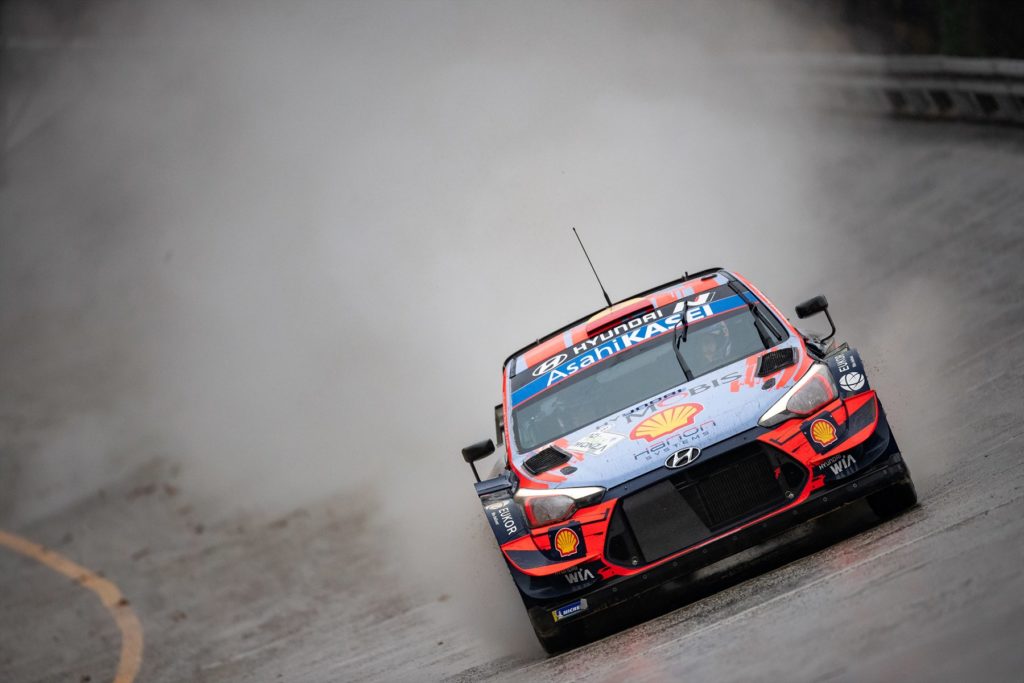 Tänak and co-driver Martin Järveoja moved up to second place on the opening stage, swapping places with Sordo and co-driver Carlos del Barrio. Although neither crew was pushing for positions, they continued to exchange places until the Power Stage with the Estonians edging slightly ahead of their Spanish team-mates.

Thierry Neuville and co-driver Nicolas Gilsoul were forced to retire from the rally in very tricky conditions on the opening day and did not re-join. It was an unusual end to the season for the Belgian crew, who opened their 2020 account with victory in Monte-Carlo back in January.

Following one of the team’s most emotional wins, further podiums followed at curtailed events in Sweden and Mexico, with Tänak and Järveoja claiming their first trophies for Hyundai Motorsport.

During the enforced lockdown period, as the world tackled the Covid-19 pandemic, the team worked tirelessly under home office regulations to identify and implement important improvements to its technical package.

When the season resumed at the brand-new Rally Estonia, it was home heroes Tänak and Järveoja who took the advantage, leading a 1-2 result ahead of team-mates Craig Breen and Paul Nagle.

Closing the gap in the title hunt, a reinvigorated Hyundai Motorsport continued to show impressive pace on the notoriously harsh gravel roads of Rally Turkey, adding another double podium finish.

The team demonstrated its title credentials in Sardinia by taking another 1-2, with Sordo and Del Barrio scoring their second victory for the team and repeating their success from 2019. The result put Hyundai Motorsport in the championship lead, setting up the tantalising and ultimately triumphant showdown in Monza.

“What a rally to finish the season!’ said Scott Noh, president of Hyundai Motorsport. “That was an exciting and fitting finale which tested us right to the Power Stage. At Hyundai Motorsport, we are honoured to complete the year on top of the manufacturers’ table and to take our second consecutive WRC title.

“This result is another important landmark moment for the Hyundai Motor Company, and especially poignant considering what we’ve all faced this year. We have put our full energy into this season, and I thank every single member of Hyundai Motorsport and the global Hyundai community for their support. We look forward to brighter days and more success in 2021.” 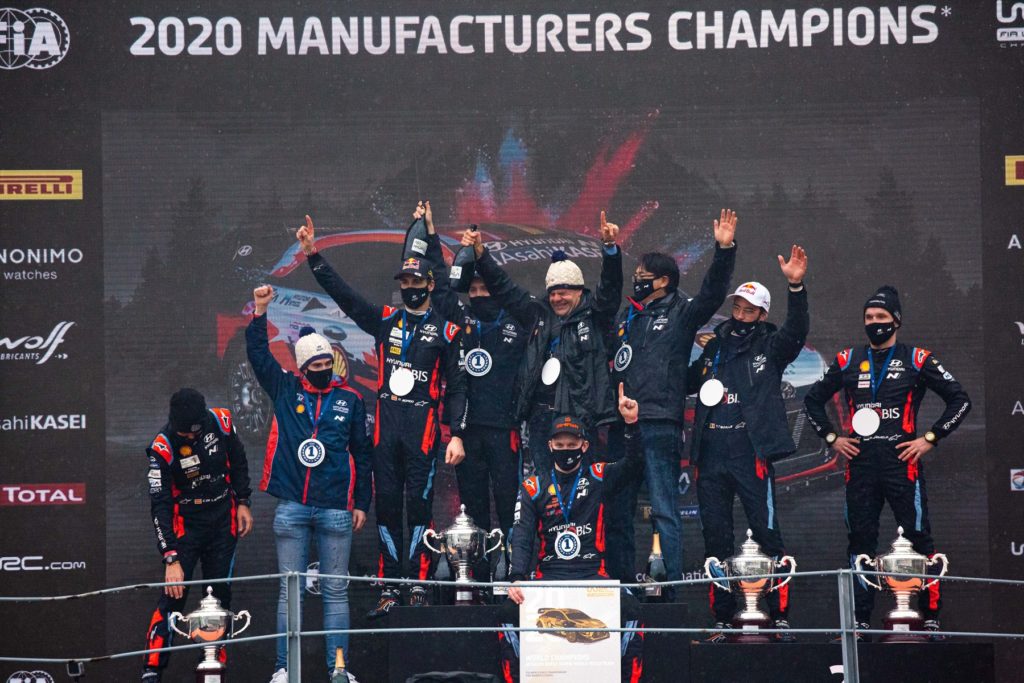 Team principal Andrea Adamo commented: “Monza is so emotional for me and brings back a lot of personal memories. From arriving on Wednesday, I have had so many emotions in my soul. It’s been a tough year; we know how many struggles there have been in the world and I have had to make sure our team – my people – have been supported throughout.

“To come to Monza and to take our second title is just wonderful and a moment to cherish. Before the Power Stage, I said it was like U2 singing Faraway, So Close, well now it’s a Beautiful Day. This is a result that we will share with the entire organisation and their families, as well as all our crews. Every single member of the team has pushed incredibly hard to get the most out of the situation and to improve our performance.

“We started strongly in Monte-Carlo – a truly special moment for all of us – and since we returned after the summer, we have been very competitive. We knew we had to get the most out of limited events, and we returned to the top of the championship based on merit, performance, perseverance and hard work. I am proud to lead such an incredible team and to fly the Hyundai flag in motorsport. My thanks go to the FIA and the WRC promoter for their efforts this year in difficult circumstances.”

Tänak said: “Our first priority today was to ensure we finished the rally with Dani to make sure we cemented the manufacturers’ title for Hyundai Motorsport. It has been a really difficult rally from the start; we have had to endure some complicated conditions, which continued on this morning’s stages with tricky, rough roads.”

Sordo said: “The target all weekend has been to secure the result we needed for the manufacturers’ championship. It has been an incredibly tricky event, but we have come through with another double podium result. For me, it wasn’t important whether it was second or third; we just needed to get the combined result for the team, which we have done.”

Neuville said: “A very special season comes to an end; it might not have been the championship that anyone expected at the beginning of the year due to the crisis, but we have achieved our goal to take our second manufacturers’ title. This is a phenomenal result for everyone at Hyundai Motorsport and I am happy to be part of this winning team.”