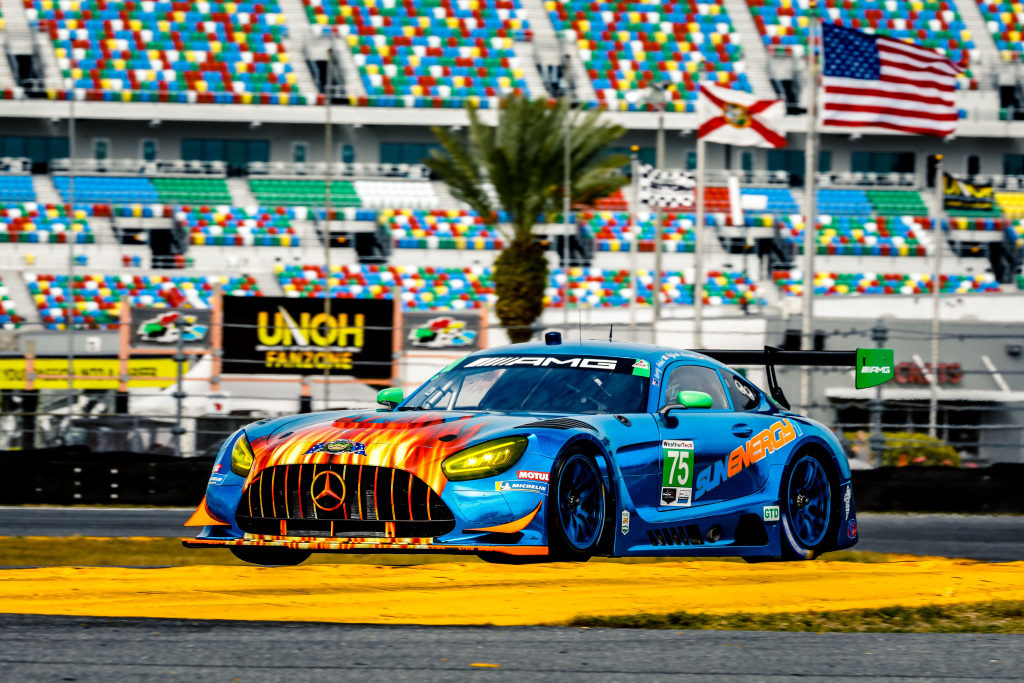 Mercedes-AMG has a brilliant start of the 2021 IMSA WeatherTech SportsCar Championship. In the Rolex 24 At Daytona, the performance and sports car brand from Affalterbach scores a sensational 1-2 in the GTD class. Indy Dontje (NED), Philip Ellis (SUI), Maro Engel (GER) and Russell Ward (USA) secure first place with the #57 Mercedes-AMG GT3 run by Winward Racing. Second place at Daytona International Speedway goes to Mikaël Grenier (CAN), Kenny Habul (AUS), Raffaele Marciello (ITA) and Luca Stolz (GER) in the #75 SunEnergy1 Racing car. The double success also marks the maiden victory by a Mercedes-AMG Customer Racing Team in the race in Florida with its long tradition. In previous years, Mercedes-AMG Motorsport already won the Michelin Endurance Cup, the hard-fought endurance classification in the IMSA WeatherTech SportsCar Championship, twice already, but never managed to win the classic 24-hour race at Daytona so far. Ninth place in the GTD class for the #28 Alegra Motorsports Mercedes-AMG GT3 rounds out the historic achievement. 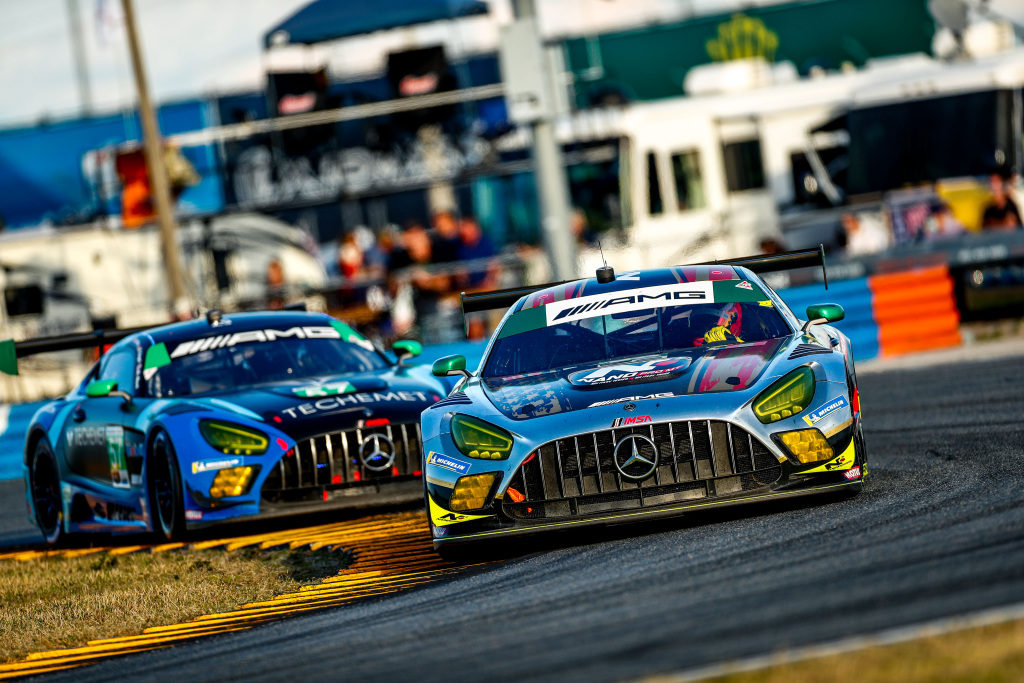 In sharp contrast to the rain-soaked track in the ‘Roar before the Rolex 24’ qualifying event a week earlier, the 59th running of the Daytona 24-hour race with its long history was held in ideal weather and track conditions throughout this weekend. At the legendary Daytona International Speedway, all three Mercedes-AMG GT3s got their race off to a good start. The #57 Winward Racing car that started from fifth place on the grid, the #75 SunEnergy1 Racing entry that was eleventh on the grid and the #28 Alegra Motorsports car that started 15th all quickly made up ground in the turbulent opening stages in the race. As the race unfolded, every single one of the three cars from Affalterbach took turns in the lead of the 19-car GTD field.

Before the night set in, the #57 Mercedes-AMG GT3 with Indy Dontje, Philip Ellis, Maro Engel and Russell Ward had permanently established itself in the top 3 and emerged as a candidate for victory by fast lap times. Even a slow puncture during the night only briefly slowed down the Winward Racing quartet. In the second half of the race, next to the #57 car, the #75 SunEnergy1 entry driven by Mikaël Grenier, Kenny Habul, Raffaele Marciello and Luca Stolz permanently established itself among the frontrunners as well. With faultless stints and flawless driver changes, both Mercedes-AMG GT3s remained on course for a podium finish throughout the morning hours as well.

There was a preliminary decision with four hours remaining in the race when Ellis in the #57 car, leading his class, staged a spectacular duel with the second-placed Ferrari over several laps. In an attempt to overtake, there was contact for which he wasn’t to blame, in which Ellis, unlike his rival, was able to keep his car on track and maintained the lead. As a result of this situation, Stolz in the #75 car closed the gap to the front and put himself right behind his fellow Mercedes-AMG driver. 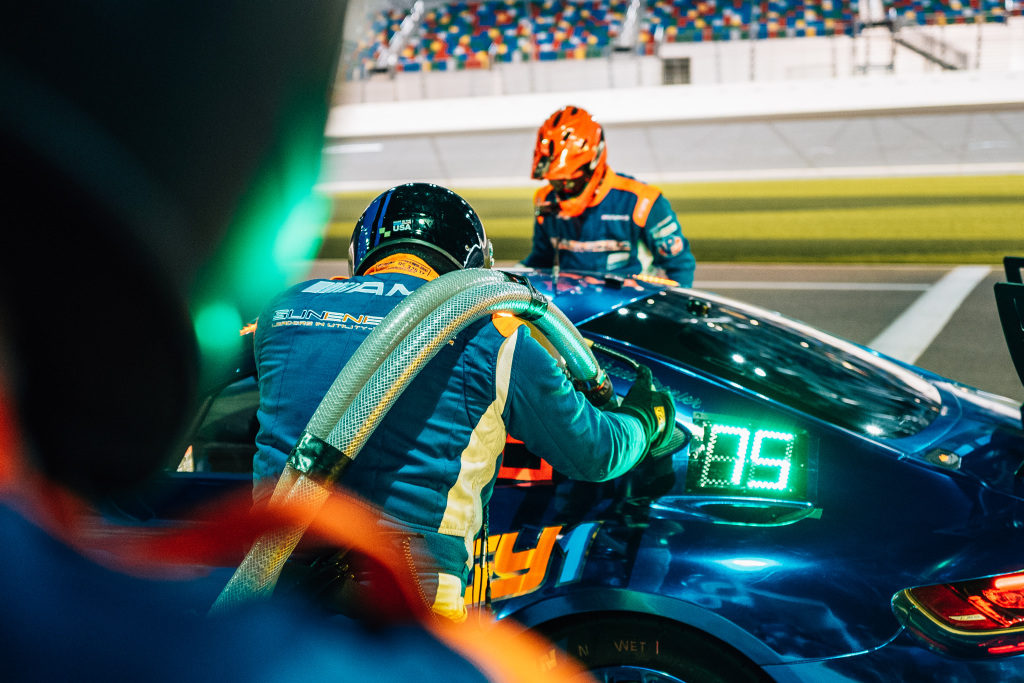 The thrilling final stage got underway with only five cars on the same lap and a double lead for Mercedes-AMG. In closed formation, the two AMG GT3s kept up the high speed and skilfully managed their lead. Brief yellows temporarily let the next cars close up again, but under green, final drivers Engel and Marciello were able to pull away over out in front over and over again. After 745 laps of the high-speed track with its spectacular banking, Engel eventually drive the #57 to the maiden win for a Mercedes-AMG GT3 at Daytona. Only 16.329 seconds down on the winner, Marciello was second across the line with the #75 car.

Another top ten result for the #28 car complements the historic 1-2 for Mercedes-AMG: Maximilian Buhk (GER), Billy Johnson (USA), Daniel Morad (CAN) and Mike Skeen (USA) finished ninth in class and therefore made it a successful debut for Alegra Motorsports as a new Customer Racing Team with the Mercedes-AMG GT3 in the Daytona 24-hour race.

Stefan Wendl, head of Mercedes-AMG Customer Racing: “Winning the legendary Daytona 24-hour race is a dream for any race driver and, of course, also for us as a manufacturer. Today’s fantastic 1-2 is a historic success for our Customer Racing Programme, especially so in such a strong field. Our strategy was aimed at pacing the race in a good way. Having taking it slightly more cautiously at the start, our cars enabled us to make it through hours of intense duels in the morning and eventually bring the 1-2 home. Congratulations to the Winward Racing and SunEnergy1 Racing Customer Racing Teams who have shown a faultless performance throughout the 24 hours. Also great respect for the good performance by Alegra Motorsports that had its first Daytona 24-hour race with the Mercedes-AMG GT3. We are very happy that they are now part of our Customer Racing family. The start of the 2021 IMSA season was more than successful. It can go on like this!”

Maro Engel, Winward Racing #57: “This is so fantastic! A really big thank you to my three incredibly strong teammates: the first time at Daytona and then such a super performance. Thanks also to Winward Racing for doing a fantastic job. We had a Mercedes-AMG GT3 that was perfectly set up. Driving the car just was fun and the strategy was right, too. I am overwhelmed and just super happy.”

Philip Ellis, Winward Racing #57: “I am lost for words. It is quite crazy that Winward Racing is competing here for the first time and is able to win it. Being part of this success is great. It couldn’t have been any better. Our consistency was the key to victory. We were simply unbelievably consistent for 24 hours. No penalties, no major incidents, nothing!”

Indy Dontje, Winward Racing #57: “I am feeling great. Winning at Daytona really is something one can be proud of. We came here rather as the underdogs and then we had this great speed. That was really unbelievable.”

Luca Stolz, SunEnergy1 Racing #75: “I am very happy with second place and the 1-2 for Mercedes-AMG. Once again, the team has put a super car on the grid for us. Thanks to Kenny and SunEnergy1 Racing. The race wasn’t easy. We had to push quite hard and eventually we only missed out on victory by mere seconds. I hope that I will get the chance to fight for victory here again some day.”

Raffaele Marciello, SunEnergy1 Racing #75: “That was a tough race for us. In the closing stages, we were fighting very hard to defend our position against those coming up from behind while still keep a chance of winning alive as well. Anyway, it was great fun.”

Billy Johnson, Alegra Motorsports #28: “That was the first race with the Mercedes-AMG GT3 at Daytona for our team. We only recently took delivery of the car, so we only had little time for preparation. We more or less started the race weekend with the goal of getting to know everything first. All in all, I am totally happy with our debut. We made it through and the car was absolutely reliable.”