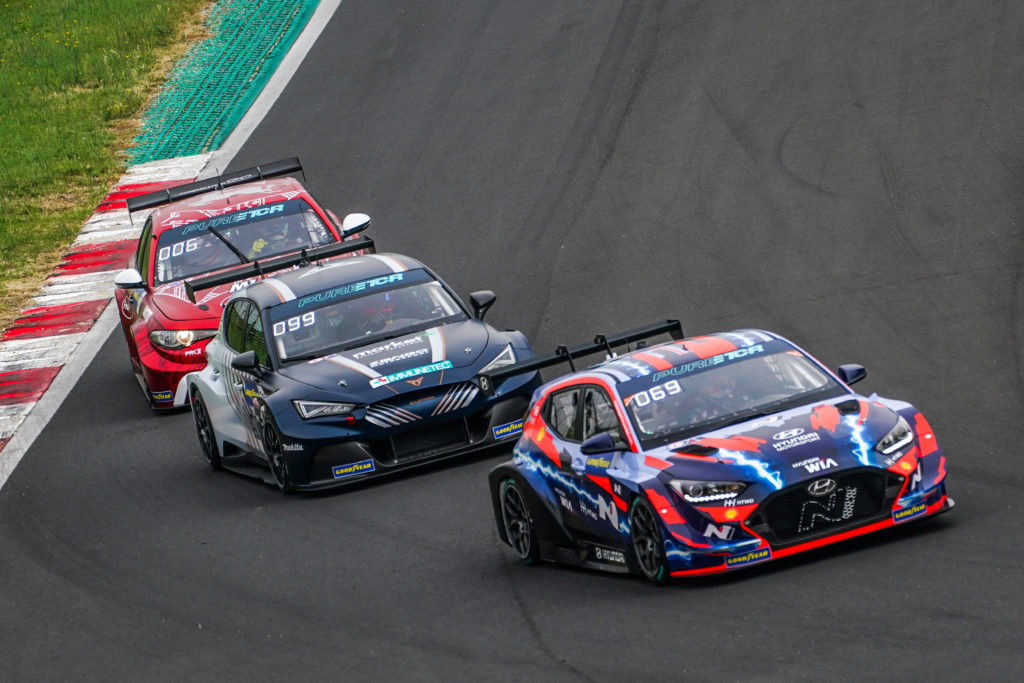 On a weekend of close racing from 18 to 20 June, Hyundai’s Veloster N ETCR with Augusto Farfus behind the steering wheel made history with a victory in the first-ever PURE ETCR Battle in Round 1.

The innovative format of PURE ETCR offers plenty opportunities for competitors to score points across the weekend’s on-track sessions. After the drivers were split into two Pools for the weekend, they then went head-to-head in Saturday’s Battle Rounds behind PURE ETCR’s unique Starting Gate in short seven-lap races.

In Pool B, Jean-Karl Vernay took the win in Round 2 with his Veloster N ETCR on Saturday and set the second-fastest time in his Round 3 time trial on Sunday. The final grid saw Vernay start Super Final B in first, a position he never relinquished on his way to victory.

John Filippi struggled initially to find pace on Saturday in the Battle Rounds. In his one-lap shootout in Round 3, Filippi set the fourth-fastest time and started the Super Final in third place. The Frenchman valiantly defended his position in the race but was ultimately unable to keep his rival behind and finished fourth. As the two highest-scoring Hyundai Motorsport N drivers, Vernay and Filippi’s points place the team second overall in the standings.

After a difficult Saturday, Tom Chilton bounced back with increased confidence in the car in Sunday’s sessions. Chilton and Farfus set impressive times in Round 3’s time trial to lock out the front row of their Super Final, with Farfus on pole and Chilton in second. Both drivers made clean starts and continued to lead at the front of the pack before heartbreak unfolded. Separate on-track incidents led to both cars retiring from the final race – an unrepresentative finish to a closely fought weekend for both drivers.

“After 18 months of development, testing, and learning, the team is proud to have been a part of this historic moment with PURE ETCR. The first-ever multi-manufacturer electric touring car series has made its long-awaited debut, and we have enjoyed incredibly close battles on track all weekend,” said Stefan Henrich, Hyundai Motorsport’s marketing and public relations director.

“Although we are running on similar technology, the difference in set-ups combined in the PURE ETCR racing format has delivered unpredictable and exciting racing. The Veloster N ETCR demonstrated its winning capabilities in its competitive debut, and now our focus is on maximising our performance to fight for the lead in the championship in the next round in Aragón.”

After strong weekend, Vernay is second overall in the drivers’ standings. “At the end of the day, we can be really happy with our weekend in Vallelunga. I am second in the championship and as a team, we scored lots of points this weekend,” said Vernay.

“Considering where we started on Saturday, it would have been difficult to be better. Now we need to focus on continuing to develop the car and improve our performance. Our competition is super strong, so our aim has to be to do the perfect weekend in Aragón.”

The French driver Filippi lies seventh in the drivers’ championship, with Farfus in eleventh and Chilton in twelfth position.

What is PURE ETCR
It is the world’s first all-electric, multi-brand, touring car championship, and, uniquely, gives the world’s largest and most-recognisable brands the chance to fight for an official manufacturers’ title for the first time.

Underpinning this all-new race series is a forward-thinking technical concept set out by TCR creators WSC Group aimed at showing off the most extraordinary performance elements of the world’s fastest-accelerating touring cars and creating exciting on-track battles.

The rules for the competition includes:

New racing concept
Not only are the cars brand new; so is the event format. To highlight the ultra-high performance capabilities of the 500-kW PURE ETCR vehicles, every car is put through its paces in a number of short, sharp, wheel-to-wheel battles; each driver pushing their car to its limits with no need for energy-saving tactics.

A live draw splits the PURE ETCR field into Battle groups with drivers from the same manufacturer deliberately kept apart for Battle 1. Cars start side-by-side with the first-drawn driver having first choice on where they line up.

An increasing number of points are awarded at every stage except Battle 3 – a single-car, all-or-nothing blast over one lap to determine who gets first choice of starting position in each final. The Grand Final winner is the event King or Queen and will automatically be the top points-scorer for the round.

2021 PURE ETCR Manufacturers’ Standings after round 1:

2021 PURE ETCR Drivers’ Standings after round 1: