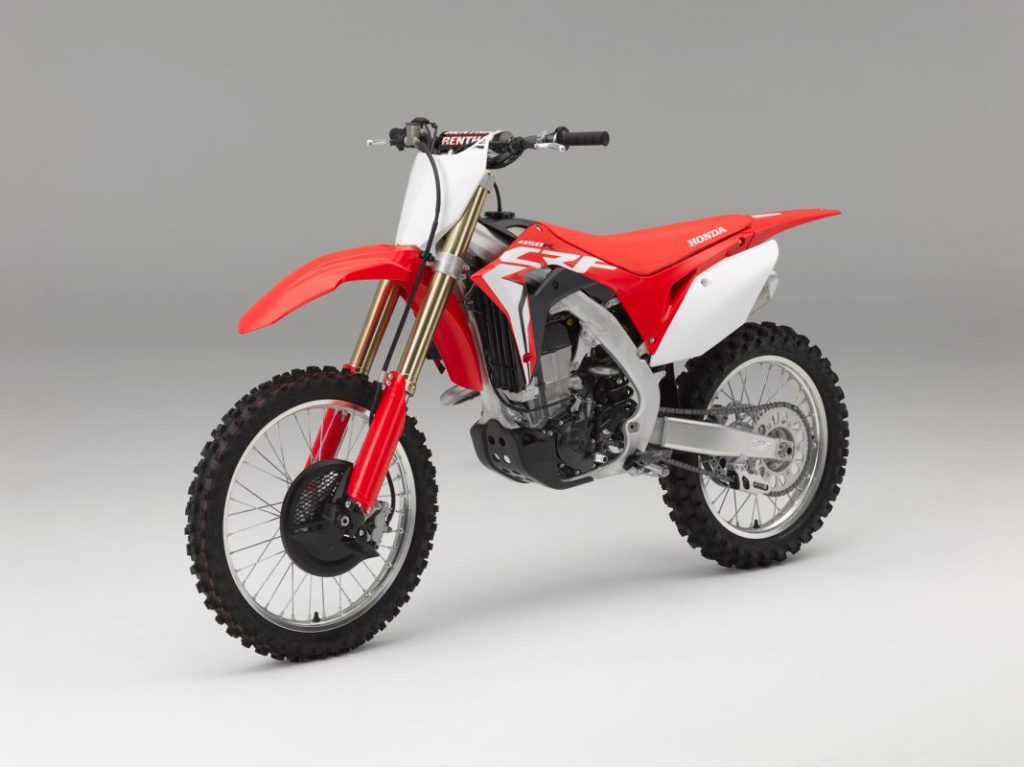 The Honda CRF450R has been a benchmark since its introduction in 2002. It has defined the art of balance, with an engine that produces hard-hitting, useable power and a chassis that allows riders of all experience levels to put every drop of that power to good use. From a rider’s perspective – whether amateur enthusiast or pro-racer – it’s always been a machine that offers total control, together with the durability and longevity that Honda has long been famed for.
And of course, the CRF450R has constantly evolved, with every upgrade drawing on lessons learned in the white heat of Honda’s moto-cross racing programmes throughout the world. Over the last eight years the CRF450R has been honed into one of the most complete race-ready rides. Now for 2017, revolution has replaced evolution. Europe’s favourite open-class moto-crosser is effectively brand new, wielding a major power boost from its new engine, plus increased grip and drive from a redrawn chassis.
It looks different, feels different and delivers a whole new experience trackside. In plain and simple terms, it’s faster. Much faster.

Mr M.Uchiyama, Large Project Leader (LPL) 17YM CRF450R:
“This is a full model change for the CRF450R. Nothing has been overlooked, and we have been relentless in our effort to provide customers with a machine that’s ahead of the pack.
Our focus has been on producing a machine with exceptional engine performance, outstanding rear wheel traction and a low centre of gravity – to create a 5% improvement in acceleration on the previous model. The phrase underpinning development was ‘Absolute Holeshot’.
We have already started racing and perfecting the 17YM CRF450R in the Japanese MX championship, winning the first five moto’s in succession.
We are proud now to give a machine with this kind of performance to motocross lovers worldwide.”

The 2017 CRF450R has been developed – with direct input from Honda’s AMA and MX GP teams – to be first out of the gate, first into turn 1 and to punch a blistering lap time. With a new engine packing an 11% increase in peak power matched to a chassis that can truly make full use of it, the 2017 CRF450R is stronger, sharper and more focused.
And as MX1-class machines are all about competition, both 16YM and 17YM machines were raced back to back by HRC in a series of start simulations. The power and drive of the new bike saw it gain a significant advantage. 0-10m took 1.53s, 6.4% less time than the outgoing machine.

The new power unit uses innovative engineering on both intake and exhaust side. On the intake, straight passageways reduce air resistance significantly for improved combustion efficiency. On the exhaust side, the twin pipes divide close to the engine, facilitating the increase in compression ratio from 12.5 to 13.5, a key element in the greater power output.
A 49mm Showa USD fork – steel sprung and developed from a race-ready factory item supplied to MX race teams in the Japanese championship – replaces the KYB air fork. The aluminium frame’s main spars are now tapered for more front-end stability and traction, and the 17YM CRF450R has completely revised geometry; it’s shorter in wheelbase, with a more compact swingarm and adjusted rake and trail. It also has a lower centre of gravity thanks to details like a lightweight titanium fuel tank and lower upper shock mount.
Brand new plastics create ultra-efficient aerodynamic performance, and a smooth, ‘organic’ shape to give the rider ultimate freedom to move. They also feature film insert graphics, which deliver sharp visuals and a durable finish. For the first time, electric start is now available as an option.

The CRF450R’s 449cc engine now makes a full 11% more top end power than the outgoing model. Overlaid, the power and torque curves of the 16YM and 17YM graphically display the performance gain of the new design: it’s stronger everywhere but especially through the midrange torque area and at the top end, with a major increase in rpm, peak power and over-rev.

To produce this gain in output every aspect of the engine’s performance was painstakingly developed together with HRC’s engineers. The cylinder head features a completely redesigned Unicam four-valve head, with a finger rocker arm on the inlet valves increasing valve lift by 0.5mm to 10mm (exhaust valve lift is also increased, by 0.85mm to 8.8mm).
Inlet valve diameter is up 2mm to 38mm; 2-way valve seat machining smooths gas flow. The downdraught intake now provides a direct, straight shot to the inlet ports and flow efficiency is improved 19% on the way in. Equally, flow out is 10% more efficient through the twin exhausts, which themselves have been redesigned with gradual radius bends. The twin mufflers are 78mm shorter.

The valve springs are oval in cross section, reducing height and allowing for more compact dimensions. A narrower valve angle of 9° intake and 10.5° exhaust (from 10°/11.5°) plus a redesigned piston boosts combustion and gives a compression ratio of 13.5:1, up from 12.5:1. A 4-hole piston oil jet (replacing the 2-hole system) reduces piston temperature and deals effectively with the heat generated by the higher compression.

The engine now uses a scavenge pump to distribute the oil by force (rather than spray) for both transmission and clutch, reducing friction, improving lubrication efficiency and greatly reducing pumping losses. Only one source of oil is employed rather than two; this means a reduction in volume from 1390cc (combined engine and transmission oil) used by the outgoing design, to 1250cc total capacity.
Light weight and compact size have been achieved with several new approaches. Positioning the balancer weight inside the crank-case reduces the distance between crank and balancer. The primary drive gear and balancer drive gear are a common part, as are the primary driven gear and oil pump drive gear.
Primary gear rotation speed is 30% faster, putting less stress on both gearbox and clutch. To make best use of the extra power and torque all five gear ratios have been adjusted, with final drive handled by 13- and 49-tooth sprockets (as opposed to 13/48).
The clutch now spins 7 friction disks rather than 8 with no loss of durability; this saves space (it’s 2.6mm slimmer, at 77mm), weight and running costs and the 6 clutch plates feature a special surface friction material. A 2mm clutch plate (thicker by 0.4mm) dissipates heat more efficiently, while the judder springs remain to generate a good, consistent connection to the clutch.

The rider controls and displays are now rationalised together and sited on the left handlebar: engine stop button, EFI warning, plus EMSB mode button and LED indicator.
And Honda’s EMSB (Engine Mode Select Button) is the key that puts instant engine character adaptability at the rider’s command. With the machine stopped, and engine at idle, a simple press and hold of the button for just under a second selects the next map in sequence.
The LED built into the button signals the map in use with a quick press and number of subsequent flashes (1 flash for Mode 1, etc). If a new map is selected the choice is also confirmed to the rider.

Mode 1 uses the standard combination of ignition and fuelling maps to present a balanced power and torque delivery. Mode 2 is more mellow in nature, giving easy-to-manage throttle feel. Mode 3 hits sharply, with aggressive and responsive power. Mode 2 and 3 can be further tailored via the existing HRC setting tool for mapping hardware and software.
For the first time, an electric starter is now available as an optional accessory for the CRF450R.

The completely redesigned chassis gives the rider absolute control of the CRF450R’s new power-up engine. The goals for this seventh generation of CRF aluminium beam frame were clear: to improve turning performance, front-end stability and traction, plus rear wheel drive with elevated levels of rider feedback and predictability.

The major visual change is in the dual main spars, which are now tapered, giving greater front end stability, traction and feel. Torsional stiffness is 6.8% less – with the same lateral stiffness – to improve turning ability and feel. 270g has been shaved. Now an extruded (rather than forged) part, the rear subframe also saves 225g.

There are many less obvious changes to the geometry and dynamic parameters of the frame’s performance. Centre of gravity is 2.7mm lower. Wheelbase is 11mm shorter, at 1482mm. Distance between the front wheel axle and swingarm pivot is increased (up 13mm at 913mm), with distance from swingarm pivot to rear axle reduced (24mm shorter at 569mm). This new geometry transfers more weight to the rear wheel for outstanding traction – a key target for the development.

Rake and trail are set at 27.4°/116mm (from 27.1°/117mm). Total wet weight is 110.6kg.
The 2017 CRF450R is a slimmer, more compact machine that’s even easier to manage thanks to the lower centre of gravity. The new geometry loads the rear tyre harder to dig for drive, matching the front end’s enhanced grip level and feel for traction at the limit.
The new CRF450R now wears a fully adjustable 49mm Showa USD coil spring fork, a version of the Showa ‘factory’ fork supplied to MX race teams in the Japanese championship. It is not an evolution of the 48mm item last fitted to the 14YM, with which it differs in every dimension: the cylinder has a 25mm diameter as opposed to 24mm, the rod 14mm (12.5mm) with the compression piston 39mm (37mm). As you’d expect from what is effectively race-spec suspension, out of the crate the fork action is supple, smooth and fully in control.

The fully adjustable Showa rear shock’s top mount is 39mm lower and the shock itself is mounted on the centerline of the machine (it was 5mm offset before), improving mass centralisation and high-speed stability. At 599mm in length the aluminium swingarm is 18mm shorter, with thinner shaping (in cross section) for the arms. It’s 220g lighter.
A 260mm wave-pattern disc delivers effective heat dissipation, power and feel from the two-piston brake caliper working it; a matching 240mm wave-pattern disc and single-piston caliper is at the rear. Lightweight aluminium rims, with directly attached spoke pattern layout reduce unsprung weight; the front is a 21 x 1.6in, the rear an 19 x 2.15in. Fitted as standard equipment are Dunlop’s MX3SF and MX3S soft terrain tyres.
The new CRF450R now uses a 6.3L titanium fuel tank, which weighs 513g less than the plastic design it replaces. The loss of half a kilo high on the machine contributes significantly to the lower centre of gravity. The smooth external lines of the new plastics help the rider move easily, and the frontal area is also narrower – the width of the radiator/tank shrouds has been reduced by 30mm while a redesigned front mudguard directs a more efficient funnel of air to the radiator. The bodywork also uses durable film inset graphics that cover a wide area with scratch-resistant style.